Medicinal values of marine life make it vulnerable to overexploitation. But it is now possible to artificially produce such qualities 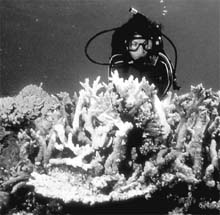 the sea squirt, a marine animal that looks like grapes, is being cultured to provide treatment for cancer. It contains ecteinascidin-743, the compound being tested as an anticancer agent. Besides other aquatic regions, the sea squirt is also found in the Indian Ocean. Its population is too small to meet the probable worldwide demand for the new drug, researchers believe. The compound the squirts produce has now been synthesised. But it is not yet viable to produce the substance synthetically.

Dominick Mendola, a scientist culturing the sea squirt at Calbiomarine Technologies Inc of California, usa, says, "This species lives on mangrove roots in its natural habitat. So we take ropes and turn them into 'artificial mangrove roots' on which the sea squirt larvae settle. We then harvest adult squirts by scraping them off the ropes, always leaving some behind to regenerate."

This is only one example of how marine life in the Indian Ocean can provide treatment for a range of diseases and ailments. The natural products branch of the us National Cancer Institute's (nci) is involved in studying how substances derived from life in the tropics affect cancer. Among oceans from where nci is collecting samples of algae and marine invertebrates is the Indian Ocean. David Newman, scientist at nci, says, "We're realising that tropical seas have as much, if not more potential for the discovery of new drugs as tropical rainforests." They believe marine life such as sponges may provide compounds that would lead to new drugs with properties to deal with tumours, inflammation, and bacterial and viral infections.

Many creatures living on the coral reef use chemicals as defence against predators. These chemicals affect the same enzymes and particular proteins, called receptors, that are involved in the disease spreading process.

Currently, at least four substances derived from marine life are undergoing clinical trials as anti-cancer drugs. Four others are in pre-clinical trials, two as anticancer drugs and two as anti-inflammatory agents, says a December 18, 2000, report in The Washington Post . One of the anticancer compounds in pre-clinical trials, discodermolide, is drawn from a deep sea sponge called discodermia. Scientists believe it has the potential to kill tumour cells better than the well known chemotherapy drug taxol, derived from the bark of yew trees.

"Taxol is not very soluble in water," said Linda Kupfer, director of marine biotechnology research under the National Sea Grant College Programme of the us- based National Oceanic and Atmospheric Administration's (noaa). "This makes it very hard to get taxol to reach a tumour site. Discodermolide, however, is extremely soluble in water. It is up to 80 times more potent than taxol in killing human tumour cells and effective against tumour cells that have developed resistance to taxol."

Researchers hope to begin clinical trials of the chemical within a year. This particular deep sea sponge is very difficult to find. To begin with, the problem was to make the new drug without overharvesting the sponge, a usual hurdle in developing new drugs from the oceans. As a result, noaa has begun funding research that looks at sustainable harvesting, aquaculture, cell culture, and laboratory synthesis as a solution.

In the case of discodermolide, a synthetic derivative has been made. But in cases where synthesis is impossible, or uneconomical, the solution lies in culturing cells from the source organism, or by culturing the entire organism, say experts. Shirley Pomponi, director of the division of biomedical marine research at the Harbour Branch Oceanographic Institution in Florida, usa, says, "This way we can make enough of these substances to meet the needs of the pharmaceutical industry without disrupting the marine environment."