To wake you up

Good news for somnolent drivers: a new system that wakes them up if they are feeling drowsy on the wheels is all set to enter the market 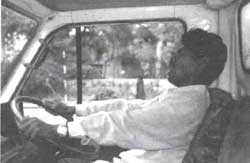 RICHARD Grace, a sensor-systems scientist at Carnegie Melon University in Pittsburgh, us, is a busy man. He has been involved in figuring out how to prevent truck drivers from falling asleep during their hectic highway journeys - a cause for nearly 30-40 per cent heavy- truck accidents in the us. The solution, he says, could be the 'Drowsy Driver', a device that uses sounds and scents to jolt drowsy drivers.

Drowsy Driver is a combination of computerised sensors that detects driver fatigue and sends alarms to combat it. These sensors work by observing a vehicle's weaving or detect the nodding of driver's head - both signs of sleepiness - and send signals to the truck-based computer. And if the signs indicate that the driver is dozing-off, the computer launches a series of warnings - beginning with a gentle voice saying 'wake up', progressing to louder and more irritating beeps and alarms and finally culminating in the aroma of a peppermint spray, that has mind alerting qualities.

Drowsy Driver's brain consists of a tiny computer placed between the driver's and the passenger's seats. Information about the alertness of the driver is feed into it from sensors throughout the truck. One such devise is a thin silicon chip mounted vertically inside the computer box. Called the accelerometer, it bends if the cab weaves, sending warning signals to the mother computer. Sensors have also been placed inside the steering column to detect jerky movements in the wheel. Another is placed inside the cabin ceiling that monitors the head movements of the driver. "Alert people always move their heads a lot," says Grace.

Working on a us $1.2 million grant from the United States National Highway Transportation and Saftey Administration, Grace hopes to develop the working model of Drowsy Driver by the end of 1996. He figures it will cost about us $1,000 to outfit a rig with Drowsy Driver. And ultimately, a version of the system could go into consumer vehicles.

But driver's fatigue is a touching subject in the trucking world. Road transport companies are often criticised for setting impossible itineraries that do not account sufficiently for driver's fatigue, traffic on the roads and weather deliays. Although most countries have rules that regulate how long the truckers can drive without rest, it is frequently flouted to meet the demands for punctuality. Grace's proposed technological innovation has raked up more questions than it answers.

Mike Warner, a driver with Averitt Express Inc, an American trucking company, does not approve of peppermint fumes being pumped into his driving cabin. "False alarms could startle drivers and can itself cause accidents," he argues. Grace concedes, "We have to walk a fine line between what is irritating and what will actually wake someone up.

There are also those who fear that drivers, knowing very well that they have a wake up alarm system, would feel invulnerable. "Indeed, no matter how well Drowsy Driver does its job in warning drivers, it obviously cannot force them to pull up," argues an official with Averitt. Consumer groups such as Centre for Auto Safety in Washington argue in favour of tightening restrictions on truckers' driving hours, and also a more aggressive policy while granting licences to drivers.