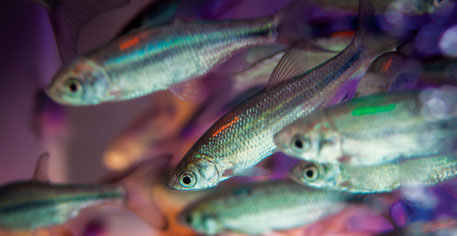 NOT JUST for humans, joint families are good for animals too. Large groups of animals often use collective intelligence and are able to solve such problems which an individual member cannot. Led by Ian Couzin, researchers from the department of ecology and evolutionary biology at Princeton University in the US have developed an algorithm to determine how changes in group size alter the response of animals to variations in their immediate environment.

For their study, published in Science on February 7, the researchers used Notemigonus crysoleucas or golden shiners, a class of fish that live in the dark. They found that as the size of a shiner school decreases the fish’s ability to find darker regions also goes down. To find out if grouping helped shiners deal with such situations, the scientists monitored a school of the fish in a tank using infra-red light, as normal filming was not possible in the dark regions which these fish prefer. Shiners cannot perceive infra red light. The fish were presented with an environmental gradient in the form of a circular patch of light at low intensity and another patch of light dotted with ephemeral high intensity peaks.

The scientists then studied the movement trajectory of shiner schools having 256, 128, 64, 32, 16, 8, 4 and 2 fish and also of a single fish using computer vision software. They developed an algorithm to determine how a fish was being influenced by the speed of other members in the group (a social force) and the proximity to dark regions (an environmental force). The data showed that the social force almost completely dominated the environmental force when all neighbours of a fish were pointing in the same direction.

Apart from the dominating social force, another thing that was consistently present was that the fishes slowed down in dark regions and were faster in the presence of light. This speed difference made the school turn towards the slowest moving fish, ensuring that maximum fish get to enjoy the darkness. “To understand this better, think of a car in which the wheels on one side turn faster than on the other. This will cause the car to turn towards the slower side. The same thing was happening in our schools of fish,” says one of the researchers, Andrew Berdahl.

Scientists believe this kind of “distributed sensing” could be widespread across the animal kingdom. “The algorithm can be tested and implemented against a wide variety of species to observe and empirically estimate the reaction mechanisms in a simplified way instead of complex processes. It can be especially useful in case of herd management in sanctuaries and reserve forests,” say Joydev Chattopadhyay, professor and Joydeep Pal, Project-Linked Personnel at Indian Statistical Institute in Kolkata.

The scientists in Couzin’s lab have collaborated with engineers at Georgia Institute of Technology in Atlanta to put the simple algorithm in little robots which, when in groups, can cruise around the lab and find light or dark areas, without any explicit gradient climbing ability of their own. Berdahl says since the algorithm is so simple, these robots would be cheap and easy to mass produce and people could deploy large swarms of them at sea to swim around and detect and monitor pollution spills or algae blooms.

“We would also like to test our simulation model into realistic ocean circulation models. This would let us find how this algorithm might be relevant for creatures such as whales tracking plankton blooms, tuna following ocean isotherms or migrating salmon locating the source of river plumes,” says Berdahl.