Too little for renewables

The sector remains a low priority for government 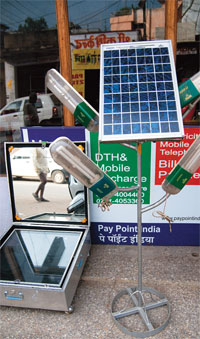 THE Union budget’s approach to the renewable energy sector remains scattershot. The only mention the sector gets in the 2011-12 budget is when it talks about the duty cuts on the energyefficient LED lights, solar lanterns and solar cells.

“Except for the small concession of withdrawing customs duty on inputs required to make solar modules and cells, and reducing customs duties on solar lanterns to 5 per cent, the renewable energy sector continues to be a low priority for the government,” a statement issued by the Forum for Advancement of Solar Thermal (FAST), an industry association, said.

The solar mission targets 20,000 MW of grid-connected solar power by 2022. This will be produced from two technologies—solar thermal and solar photovoltaic. The budget exempts customs duty on inputs used in solar cells for solar photovoltaic panels, but ignores the solar thermal sector. The budget has also reduced customs duty on solar lantern from 10 per cent to 5 per cent. Solar off-grid industry representatives say these lanterns form a small part of solar off-grid needs.

The modalities for disbursal of the National Clean Energy Fund announced in the last annual budget have not been notified this year. The fund estimated to be over Rs 3,000 crore is based on proceeds from cess of Rs 50 per tonne of domestic and imported coal.

“We were expecting some clarity on the clean energy fund. The fund was to be used to support renewable energy technologies. But the modalities are still being internally debated without involving the industry and non-government stakeholders,” said Anil Lakhina, chairperson of FAST.

The fund, said a wind energy representative, was hijacked for non-energy purposes. Without deciding its modalities, the budget allocated Rs 200 crore for the Green India mission and another Rs 200 crore for launching environmental remediation programmes from the Clean Energy Fund.

LED assemblers have welcomed excise duty reduction from 10 per cent to 5 per cent. Its high cost had limited its use in India. Reduction in duty will boost growth of this technology in television sets with LED lights and solar lighting systems that support LED lights, said Sanjeev Kumar, general manager of Surya Roshni, a Delhi-based LED assembling unit.