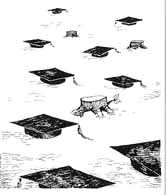 India's agricultural universities are producing far too many forestry graduates for the jobs available. Protests by the graduates prompted the Union ministry of environment and forests (MEF) to write to the department of personnel in the Union home ministry, requesting them to include forestry as an optional paper in the civil service examination conducted by the Union Public Service Commission. Though the Commission is reportedly against the idea, the MEF is persisting with its demand.

By 1985, most agricultural universities in India were offering forestry courses at the instance of the MEF, which anticipated a large demand for trained personnel for the several afforestation and social forestry programmes that had been initiated in the country. The ministry went to the extent of giving substantial financial assistance to the universities through the Indian Council of Agricultural Research. As a result, 11 universities presently offer such courses. Few students have, however, readily found employment.

A senior official reveals the ministry has been visited by delegations of unemployed forestry graduates demanding reservations in all categories of government jobs. The graduates pointed out that most of the employment opportunities related to their training are in the public sector because "the government owns most of the forests".