Was the attck on Chipri oxalic acid plant right? 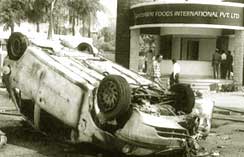 about 4,000 villagers, including 2,000 women, attacked an oxalic acid plant of Star Oxochem Private Limited (sopl) at Chipri village in Maharashtra's Kolhapur district on January 1, 2005. They destroyed 18 four wheelers, torched four imported cars and smashed several computers and pieces of furniture: a loss of nearly Rs 500 crore. They were protesting groundwater contamination caused by the plant. When the police entered Chipri to arrest some villagers, it faced the resistance of the entire village and went back empty handed. sopl's owner was forced to agree to the plant's closure a day later. D B Boralkar, member secretary, Maharashtra State Pollution Control Board (mspcb), Mumbai office, labels the incident as vandalism in the name of environment by miscreants posing as complainants.

sopl 's Chipri plant started functioning in 1998. Following strong protest by villagers, the mspcb closed it in 2002 but it was reopened a month later on the promise that it would follow some norms. This, the villagers allege, was not done (see Down To Earth, 'Toxic trap', October 31, 2004, p 40).

On January 2, 2004, sopl owner Sanjay Ghodawat held meetings with former member of parliament (mp) Kalappa Awade, former member of legislative assembly (mla) S R Patil, mp Nivedita Mane and mlas Raju Shetti and Raju Awale. Residents of Chipri gathered at the village square later in the day. Two young villagers, Anil Chaugule and Anna Pawar, had staged an indefinite fast since December 30, 2004. Ghodawat, who also hails from Chipri, went to meet them along with the people's representatives and urged them to end their fast. He also announced that the oxalic acid plant will be closed. "People appealed to mspcb to arrest the pollution of water bodies. The district collector should have intervened. We talked to him and the Ghodawat family. We cautioned that people unrest is on the ascent," Patil, Mane and Shetti said. Ghodawat said: "I would never like to earn money by damaging my own village. Let us assess the reasons and then come to a conclusion."

The crisis had started deepening on July 7, 2004, when two children in the village died of diarrhoea and vomiting and the villagers attributed the deaths to water contamination by the plant. mspcb regional officers collected water samples of 15 wells and bore wells in three different sets. All the samples were found unsuitable for drinking. So, the villagers decided on August 15, 2004, that the plant should be closed down. In the gram sabha meeting on November 18, 2004, they decided that sopl's licence, which lapsed on December 31, 2004, should not be renewed. In a letter dated November 27, 2004, they appealed to mspcb president to close down the plant.

S R Pati, mspcb officer at Kolhapur, says the board had issued a show cause notice to soplon November 28, 2004, and asked it to reply within eight days. It had also formed an expert committee, headed by a person chosen by Chipri villagers, to assess the situation. He also said the mspcb had ordered the plant's closure on January 1, 2005.