Top of the world

It's a voyage of discovery as biologists travel to the unexplored stretches of the rainforest canopy, learning more about this "green ocean" 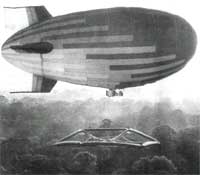 welcome to the eighth continent -- the thin-but-extremely-rich layer of life known better to the rest of the world as the rainforest canopy. Most of the world's species can be found here, in this tropical treetop environment. This is because the majority of species are insects, and the majority of these insects are found in the rainforest. But what is truly surprising is that though this huge tropical wonderland is full of undiscovered species and it is a virtual treasure-house of biological and ecological riches, and it also plays a crucial role in the world's ecosystem, it is yet to be explored fully.

The reason for this is its inaccessibility. There are two ways to get around this problem -- one is to get up there yourself. And many canopy biologists have become pretty adept at ropes and other climbing gear over the years. The other way is to bring the canopy down to the ground. Some early scientists cut down the trees to get a better look at the treetops but, given the current "endangered" status of the rainforests, this is not a very good idea. So experts use various other tactics. Terry Erwin, from the us -based Smithsonian Tropical Research Institute, uses fogging techniques. He releases insecticidal gas from the ground that floats up knocking out all the insects, which then fall into big sheets spread underneath.

These methods led Erwin to conclude some 15 years ago that there were at least 30 million species on Earth as opposed to the then-accepted figure of 1.5 million. And though his claims have been disputed, his efforts helped focus biologists' attention on biodiversity and the importance of the canopy.

Other methods of accessing the canopy include using an enormous crane with a 125-feet span, and even a gondola. These methods, however, have their own limitations because they are relatively fixed and immobile. Therefore, despite its importance, the number of scientists studying the canopy is very small -- and to work there requires a singular dedication.

Francis Halle, a tropical botanist a France's University of Montpellier, and Gilles Ebersolt, a French architect, came up with a solution that would help experts get close to the treetops without the conventional restraints. They designed and built the "canopy raft" -- a platform of inflatable tubing and netting that lies unsupported, draped across the treetops, allowing the scientists and experts to move around and work freely.

Needing a means of moving the raft from one site to another, they brought in Dany Cleyet-Marrel, one of France's top balloon pilots, to design and fly a dirigible with a manoeuvrable sledge -- a basket like contraption -- hanging underneath.

"It was a daily ritual beginning each day before dawn in a clearing in a forest in French Guyana," says Rick Cannell, a scientist who participated in a recent treetop expedition. "We would unfold what looked like a giant, brightly coloured tent and pump hot air into it until it turned into an airship."

By sunrise, the team would be flying gently over the trees -- "a green ocean of forest stretching to the horizon", as Cannell described it in a Financial Times report -- with mist lingering in pockets and monkeys crashing through branches below. The airship would move from tree to tree, while the scientists on board collected samples, cutting and labelling branches with the freedom of fishermen who have just discovered boats.

"I was there to investigate the chemical differences between trees at the top of the canopy and the same trees lower down. Also on the mission were scientists from Europe and North America -- botanists, groups studying ants and other canopy insects, insect herbivory, tree morphology and much more," Cannell wrote in the report.

The expedition, however, was not entirely free of commercial undertones. "There were a few of the world's top 'noses' -- experts from a Swiss perfume company sniffing their way around the canopy looking for new fragrances," Cannell wrote.

Later, the team went back to the forest at ground level -- a very different experience. "The noise of birds and insects was piercing and there was much less light under the thick foliage," Cannell wrote.

The team, armed with the cumbersome-looking airship and raft, now plans to go off to Gabon to carry on with their mammoth task of exploring the canopy.