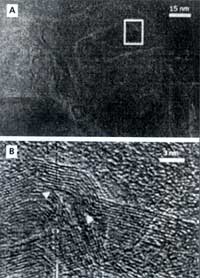 CARBON thin films are one of the most important applications of carbon nanotubes and elongated fifflerenes, named after Buckminister Fuller, the inventor of the geodesic dome. G A i Amaratunga and his collaborators Zihe University of Liverpool, UK, have reported the development of a hard, elastic, carbon thin film made up of carbon nanoparticles (Nature, Vol 383, No 6598).

Last year, a research group had reported the fabrication of a very hard, elastic form of carbon nitride in which the carbon sheets were interlinked because of the presence of nitrogen. Amaratunga and his co-workers have developed hard, elastic-thin films of pure carbon.

The technique used by them is based on the high pressure arc plasma method used to produce fullerene molecules and nanotubes. In their experiments, they used a high local gas pressure carbon arc technique with the arc on the graphite cathode acting as a carbon source. The arc is created by a helium or nitrogen jet in a high pressure region, while the rest of the apparatus is at a very low pressure.

The nanotubes formed in the arcing process are carried by the high pressure gas flow and deposited on the substrate in the low pressure regiom-The resulting film is studied with the help of high- resolution electron microscopy and its structure and properties ascertained. It has been found that the film consists of well-formed, fullerene-like structures interspersed with an amorphous carbon background. Interestingly, when the film was deposited on a heated substrate (at 350'c), the hardness as well as the elastic recovery of the films increase significantly.

With these results, the researchers believe that a qualitatively new ,form of carbon thin film has been formed. Theoretical and experimental studies on this new carbon nanoparticle thin film are still continuing. The complete theoretical understanding of the properties and the detailed structure of the films is still not known and should be clear when further studies are made. Nevertheless, because the process of making the films is relatively simple, their potential application as protective coatings on a host of things ranging from computer memories to surgical implants could emerge soon.