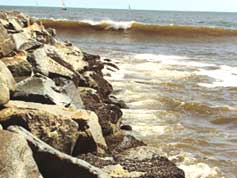 scientists have raised concern over India lacking a programme to regularly monitor harmful algal blooms (habs), which may lead to massive fish kills and even threaten public health. Though non-toxic blooms have been commonly reported from Indian waters, the cases of hab s have been on the rise since 1981.

In the latest case of hab reported from south Kerala in September 2004, more than 200 people, mostly children, fell sick and had to be briefly hospitalised. Researchers from the National Institute of Oceanography (nio), Goa, who investigated the incident, say the event had led to the death of fish on a large scale. The stench caused nausea, vomiting, chest pain and short periods of breathlessness among the people living in the coastal areas. The algae responsible have been identified as Noctiluca miliaris, as per a paper by R Jyothibabu and others from nio's regional centre in Kochi. The findings appear in Current Science (Vol 89, No 9, November 10, 2005). A similar event had occurred in Kerala in 1988.

Algae are microscopic aquatic plants that lie at the bottom of the food chain. Algal blooms become a problem when they are very large or last for a very long time because then they use up all the oxygen dissolved in water, imperilling other marine creatures, including fish.

Apart from natural phenomena such as upwelling and land run-off during monsoon, excessive fertiliser use, intensive aquaculture and release of ballast water from ships also aid algal blooms, according to Prabhu Matondkar from nio, Goa.