The Pacific killer whale, orcas, could be one of the most contaminated marine mammals 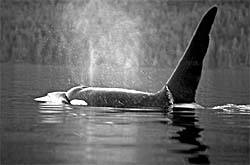 today , they are promoted by the West as a scenic wonder. But less than a century ago, they were regularly shot by fisherfolk as "nuisance animals" that emptied their nets. During World War II, soldiers used them for target practice and, even 40 years ago, they were categorised as "savage sea cannibals". Orcas have a chequered past but, just when everything seemed smooth, they are threatened with extinction.

According to a study by researchers at the Institute of Ocean Sciences in British Columbia, Canada, orcas are among the most contaminated marine mammals in the world. Samples from 47 live orcas showed polychlorinated biphenyl (pcb) concentration up to 500 times greater than those found in human beings. pcb s are chemical compounds used in electrical power equipment, electronics and the printing industry.

The researchers sampled three communities of killer whales that swim inland and in coastal waters around Washington, usa , and British Columbia. These include the ocean-faring transient whales that feed on seals, sea lions, porpoises and other marine mammals, and the southern and northern resident families that dine exclusively on fish, especially the salmon. The majority of resident samples were taken from northern pods because of the high boat traffic in the southern waters (The Washington Post , November 9, 1999).

pcb levels in the northern residents averaged 46 parts per million (ppm), while that in the southern pods (which swim the waters of the more industrialised southwestern British Colombia and northwestern Washington) was 146 ppm. But the most contaminated were the transients with 251 ppm. By comparison, humans in the us average a mere 1/2 to 7/10 ppm.

Documented effects of pcb contamination in various marine mammal species include weakened immune systems, decreased reproduction, tumours and skin disorders. In laboratories, offspring of rats fed with pcb s showed inability to pick up certain low frequency sounds. "Whales communicate with low frequency sounds. So you have to wonder what pcb s are doing to their ability to communicate," says Theo Colborn, senior programme scientist for the World Wide Fund for Nature.

The recent population decline of orcas has not been linked to pcb contamination as yet. However, the study shows that new-born orcas are likely to be blasted with toxins through the placenta and mothers' milk. "They are bathed in pcb -laden milk at a time when their organs are developing," says Ross.

Rich Osborne, science curator at the Whale Museum, Washington, describes the recent population decline as the longest and steadiest in decades. "If this is due to pcb s, and something is not done about it, the future looks bleak," says Ken Balcomb, director, Centre for Whale Research in Washington.