How China's growing wood imports are affecting its neighbours 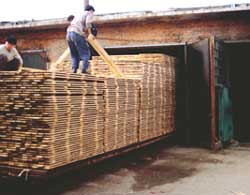 It is not just China's economy that is growing phenomenally. An aggressive afforestation policy, put in place in 2000, has seen large tracts being covered by trees every year. But afforestation efforts are no match for China's growing demand for wood -- much of it a result of domestic policies -- increasingly met through imports. With the strong pull its demand for wood exerts on its neighbours, China has been accused of exporting deforestation.

Last year, China planted trees in some 7.2 million hectares (mha) -- increasing its total forest area to 175 mha, says Cao Oingyao of the State Forestry Administration (sfa). The year before, some 8 mha were afforested, and by the end of 2005, another 7 mha will be covered. China is doggedly pursuing its goal to increase forest cover to 27 per cent of its area by 2050. These seemingly laudable efforts mask another reality: China faces a deficit of 75 million cubic metres (m3) of wood to meet domestic needs and export industry demands. But it refuses to touch its own forests. Following floods in the Yangtze river catchment in 1998 that killed more than 4,000 people and rendered more than 18 million homeless, China imposed a sweeping ban on logging in twelve provinces, later extended to eighteen. Domestic timber production fell by 97 per cent from 1997 to 2000.

China's economic policies have been at odds with its forest conservation approach. The former have directly promoted wood consumption. For example, the construction and residential housing reforms have led to a massive demand for wood as building material. Policies to develop the backward, western parts also promoted the use of wood. Besides, tariffs on forestry products fell drastically as China prepared to become a member of the World Trade Organisation. In many places along China's borders, tariffs on logs have been lifted altogether. This has suited its conservation policy but has left only one option -- importing wood.

"China is today the world's second largest importer of wood products," said Stephen Midgley, director of Salwood Asia Pacific, a private firm, at a conference in August. Between 1997 and 2004, Chinese imports of wood almost tripled from 40.2 million m3 to 106.7 million m3, and doubled in value from about us $6 billion to almost us $13 billion, says a joint study by the Center for International Forestry Research (cifor) in Indonesia, an ngo based in Washington called Forest Trends, and the Chinese Center for Agricultural Policy. The impact this has had on countries supplying wood to China have made it the focus of concern and investigation in recent years. Despite plantations of fast-growing species, the country remains dependant on others like Russia with large tracts of natural forest for large, high-grade logs.

China is importing more logs and less plywood, and purchasing pulp, rather than paper -- a strategy to keep jobs at home. Since the late 1990s, imports of timber, lumber and pulp have grown rapidly. But exports have risen even faster owing to the international demand for cheap Chinese wood products, mostly furniture. Over the last seven years, Chinese timber product exports have tripled (12.7 million m3 to 36.42 million m3) and increased 4-fold in value, according to cifor.

In 1997, over 50 per cent of the value of China's wood imports was of higher value-added products like plywood, veneer and fibreboard. But by 2003 the nature of imports had changed dramatically in favour of wood.At present, as much as 78 per cent of China's imports (by value) consist of logs and sawnwood(see table: Drastic shift).

The city of Suifenhe on the Sino-Russian border illustrates the Chinese approach: without using wood from its forests, make a good profit from wood products. Declared both a log importing base as well as an exporting base in 2001 by sfa, Suifenhe receives raw wood, processes it and exports the finished products, cashing in on value addition. Similar is the case with other major gateways like Manzhouli and Erlianhot in inner Mongolia. Hundreds of timber processing mills have come up along the Sino-Russian border. From 1997 to 2003 Chinese imports of Russian wood have increased from less than 1 million m3 to over 15 million m3. China has "driven heavy over-logging in accessible forests in the southern areas of the Russian Far East and eastern Siberia, resulting in irreparable ecosystem changes in logged permafrost areas", points out Worldwide Fund for Nature (wwf) China.

Besides Russia, the other main exporters of wood to China are Indonesia and Malaysia. Myanmar, Papua New Guinea (png), Thailand, New Zealand, Gabon, the us, Canada and Germany also supply timber to China. Over 70 per cent of China's timber product imports come from countries in the Asia-Pacific region. For these countries, China is the dominant market. China receives 40 per cent of all Russian log exports; over 58 per cent of png's roundwood production; 41 per cent of Malaysia's log exports; 70 per cent of Indonesia's sawnwood and 50 per cent of its pulp exports.

The boom in Chinese wood imports has brought into focus issues of illegal logging, corruption and unsustainable harvesting practices in the countries supplying wood. The trade has also impacted several million indigenous and other forest-dependant people in the wood-exporting countries and 13 of the 25 global biodiversity hotspots have been affected.

Trade statistics and reports by cifor, wwf China and groups like the London-based Environmental Investigation Agency (eia) show much of the region's illegally harvested wood finds its way to China. According to a wwf China study, majority of China's timber imports originate from countries with documented cases of illegal logging. For instance, 50 per cent of all export trade in the Russian Far East is illegal. "The trade of logs from illegal sources functions through a web of interrelated networks of corrupt local authorities, operators and loggers, banks willing to provide and launder money, shipping companies, customs agencies, manufacturers and an undiscriminating and greedy market," says Midgley.

Discrepancies between the volumes of wood declared by an exporting country and the declared import by China indicate the extent of illegal trade. In Indonesia's case, this difference was as much as 20 per cent in 2002 or over 2.6 million m3. Earlier this year, eia uncovered a merbau wood trade route controlled by crime syndicates sending 20 shiploads a month from Indonesia to China, where they are cleared using fake Malaysian papers. Malaysia has become the major exit route for wood smuggled from Indonesia, which banned timber exports over two years ago.

Similarly, Chinese import records were 27 times Myanmar's declared exports for 2000. Myanmar has more than half of Southeast Asia's natural forests. According to Global Witness, a London-based organisation, "Much of the logging is financing the military regime or insurgent groups engaged in conflict. The situation has been compounded by the involvement of Thai and Chinese logging companies, with widespread and destructive logging occurring along the border with China."

Apart from investing in plantations and setting up cheap processing units in other countries, China also has commercial logging permits in countries like Russia, Myanmar and Indonesia. In Myanmar, Chinese logging companies with Chinese employees harvest most of the China-bound timber. The short-term logging contracts lead to forest degradation since the hills are quickly logged before the contract runs out.

In the past four to seven years, the us and the eu have been the largest importers of Chinese products, much of it re-exported from Hong Kong. While China may not concern itself about the destruction of forests and habitats in countries where it buys its wood, its Western customers have begun asking questions about illegal logging and timber smuggling.

As awareness grows, these customers may be able to influence the nature of this trade and reduce the severity of its impact on forest-rich Southeast Asian countries.