Traffic jam up there 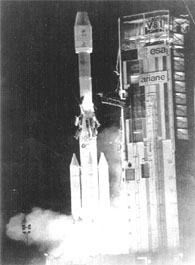 arthur C Clarke, the doyen of science prophets, has warned that space age could come to an abrupt end because of the proliferation of orbiting junk. Clarke says the launch of hundreds of satellites during the next five years would increase the amount of orbiting debris so much that future space exploration may become impossible.

"You have to wonder whether the space age might have to end 50 years after it began. I'm afraid that future astronauts will have to fly through orbiting minefields," says Clarke.

A lot of experts also believe that ambitious plans to put more than 1,000 satellites in low Earth orbit (leo) between now and the year 2001 will significantly increase the risk of collisions with thousands of large human-made objects already circling the globe. The greatest fear is that explosive collisions between large objects travelling at 49,600 kmph will cause a 'cascade effect', where debris created by one collision crashes into other objects to produce even more junk.

Clarke is also concerned that radio interference caused by the new satellite constellations will hamper radio astronomers by swamping interstellar signal with reflected noise from Earth. The usa's National Aeronautics and Space Administration has said that the 'cascade effect' would not happen for at least 50 years, but scientists at the Defence Research Agency (dra), uk, believe the new satellite plans bring the prospect closer.

Richard Crowther, dra's leading expert on space junk, told bbc how his computer models of satellite constellation have altered past predictions. "Rather than the cascade reaction occurring in the next 20 to 50 years, we could expect it, perhaps, to occur in the next 10 to 20 years," he said.

There are at least six proposals for new satellite networks, such as the Iridium project to launch 66 mobile-phone satellites beginning November-December, and the ambitious Teledesic proposal, to put more than 900 Internet satellites aloft, starting in 1998.

Crowther said the overcrowding of such a small region of space close to Earth will be unprecedented. "They are all at the same altitude and they all pass through the same regions of space," he said, adding "whereas in the past satellites were more isolated, these are all going to be in the same place."

The risk of collisions is compounded by the space debris, which is concentrated in the regions where the satellites will orbit. An investigation by the us National Research Council found more than 10,000 objects bigger than a cricket ball circling the Earth, and millions of smaller particles in orbit as a result of 4,500 spacecrafts being launched since the first Sputnik in 1957.

Because of the enormous speed of orbiting objects, something the size of a cricket ball can shatter a satellite if it hits a vulnerable spot. Even flecks of paint can dangerously damage the windows of a space shuttle.

The risk from space junk came into dramatic focus last August when scientists tracking orbiting satellites witnessed for the first time a collision between two objects. A French military satellite and a portion of an Ariane rocket launched 10 years ago crashed into one another, shattering the satellite's six ft-long stabilising boom.

Removing space debris is considered to be technically and economically unviable although, in time, many of the larger pieces of junk are expected to crash back to Earth or burn up on re-entry into the atmosphere. Scientists are greatly worried that the returning debris might pass through the orbits of the manned space missions in future.