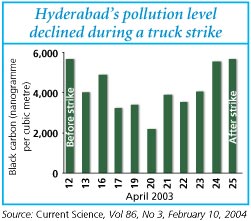 a new study demonstrates the feasibility of pollution control programmes. As per the findings, published in Current Science (Vol 86, No 3, February 10, 2004), levels of the harmful pollutant black carbon decreased drastically in Hyderabad during a truck strike in 2003. Truck operators went on a nation-wide strike from April 13-23, 2003 to protest against rising diesel prices. The decreased truck traffic right away impacted Hyderabad's atmosphere because trucks are key emitters of black carbon. Moreover, the heavy vehicles account for 19 per cent of the city's vehicular density.

During the study, researchers from Hyderabad-based National Remote Sensing Agency and Thiruvananthapuram-based Vikram Sarabhai Space Centre examined pollution data of April 1-25, 2003. They found that black carbon concentration decreased suddenly the day the strike started; on subsequent days the levels declined gradually since black carbon takes time to get removed from the environs. As soon as the strike was called off, the levels again went up.