Transgenic out of favour 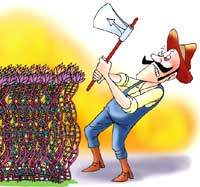 The resistance to transgenic crops is growing in Italy. Of the 1,209 municipalities in the country's northern Piedmont region, 248 recently declared themselves free from genetically modified organisms (gmos ), according to Coldiretti, the Italian farmers' association. The number is expected to rise further, especially in the region's Turin province.

Fourteen of the 20 Italian regions and 27 provinces are actively involved in the anti- gmos campaign. A total of 1,806 municipalities have declared their areas gmo- free. Piedmont has the highest number of such municipalities, followed by the southern region of Campania at 196. At 44 per cent, the Lazio region has the highest percentage of municipalities rejecting transgenic crops.