If you had a magic wand and you could eliminate corruption from one of the following institutions, what would your first choice be? " The overwhelming answer seems to be political parties. So says the corruption watchdog Transparency International, after a global survey that gave respondents a host of institutions to chose from 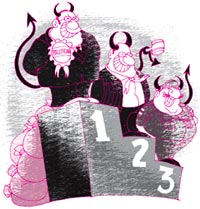 Who's the most corrupt of them all? "If you had a magic wand and you could eliminate corruption from one of the following institutions, what would your first choice be? " The overwhelming answer seems to be political parties. So says the corruption watchdog Transparency International (ti), after a global survey that gave respondents a host of institutions to chose from. According to ti's first Global Corruption Barometer, politicians were believed to be the most corrupt in three-fourth of the countries, and by almost 30 per cent of the people, surveyed -- most notably in Argentina and Japan.

Next to wily politicians in corruption's hall of fame came the courts and the police, being given this dubious distinction by 13.7 and 11.5 per cent of those surveyed. Close behind came medical services and education.

The survey, commissioned from Gallup International, asked members of the general public in 48 countries, across all continents, which institution they would like to remove corruption from if they were given a magic wand.

In 33 countries, the public said they would most like to remove corruption from political parties, with more than half the respondents in Argentina and Japan saying so. The courts were blamed the most in Peru and Indonesia, followed by the police, who were held responsible for corruption by one-third of the people in Hong Kong, Malaysia, Mexico and Nigeria. In Bosnia and Herzegovina, Croatia, Georgia and Poland, one-fifth of the respondents selected medical services.

"The people of the world are sending a clear message to political leaders: they have to rebuild the trust of ordinary people," ti chairperson Peter Eigen said, "It is time to recognise the full extent of corruption among political elites in the developed and developing worlds, and the need to curtail conflicts of interest and political immunity."

As for the general optimism level, Colombians and Indonesians are the most hopeful that corruption will decrease in their countries, while a majority of Indians, Turks and South Africans expected corruption to rise.

The complete report can be accessed at http://www.transparency.org