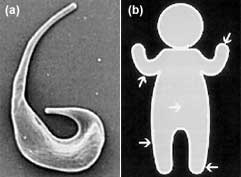 for millions of Indians, Africans and those living in the Middle East and the Mediterranean, it is an unfortunate genetic legacy that has been passed over several generations -- a chromosomal defect that cripples people. Sickle-cell disease is perhaps the most common single genetic disorder plaguing humans.

The two known varieties of sickle-cell disease include sickle beta-thalassaemia and sickle-cell anaemia. The disease is caused by a defect in one of the genes that carries plans for cellular synthesis of haemoglobin. An estimated 300 million people carry this defective gene all over the world.The imperfect haemoglobin that the abnormal gene manufactures causes the red blood cells to 'sickle' -- to take up distorted shapes which may clog the patient's blood vessels. The result is swollen limbs, severe joint pains and in worst cases, death from damage to the brain, lungs or other vital organs. There are an estimated one lakh thalassaemic children in India and about 10,000 are added every year.

Sickle-cell disease is an example of the quirks of genetic fate. If only one parent passes on this faulty gene, it is beneficial to the recipient as it confers upon the person immunity to the tropical scourge -- malaria -- an enormous boon in the mosquito-infested tropics. But for those who receive the defective gene from both the parents, it is a nightmare.

A cure may finally be in sight for the disease, according to a just published study in the New England Journal of Medicine (Vol 335, No 6). Mark C Walters and Keith M Sullivan with 10 other colleagues from the Fred Hutchinson Cancer Research Centre, Seattle, us, and other collaborating institutes in Europe have described how they have cured 16 children who were suffering from sickle-cell disease. The five-year study, first of its kind, was conducted inducting children from 15 centres in us, uk and Germany. The technique of bone marrow transplantation, widely used to treat people suffering from leukaemia, was adopted.

Bone marrow is the tissue in which blood cells (and also many cells of the immune system) are generated. As in all transplants of foreign tissue, the donor has to be immunologically compatible with the recipient; otherwise the transplant is likely to be rejected. Bone marrow is particularly difficult to match. The best donor, therefore, is a patient's healthy sibling. And, because their immune systems are not fully developed, the most successful transplants are those which are carried out between children.

The team at Hutchinson's carried out 22 transplants in children with advanced sickle-cell disease. The patients first underwent chemotherapy to destroy their defective bone marrow. They were then injected with new marrow taken from healthy siblings. The new marrow, not being genetically pre-disposed to develop sickle-cell disease, then went on to generate healthy blood cells. Four patients rejected the transplants but survived. One died of brain haemorrhage. And one child succumbed to graft-versus-host disease, in which the immune cells generated by the transplanted marrow attack the body of the patient. But after two years, the remaining patients are still healthy.

Physicians also find it a problem to choose the recipient. Though the procedure works best for children under 10, the most serious symptoms of sickle-cell disease do not, in many cases, appear till later in life.