Why trees don’t bleed to death on being injured 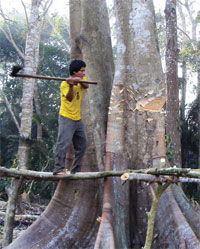 RESEARCHERS have discovered how “check valves” in cells protect injured trees from bleeding to death. The study, published in the September issue of American Journal of Botany, revealed how these nanostructures help contain damage in bordered pits (microscopic cavities in wood cells)Ã”Ã‡Ãªwhich normally allow sap (the liquid which carries nutrients to all parts of the plant) to circulate through adjacent cells.

Studying bordered pits is quite difficult. The process to study wood at the nanolevel requires it to be dried, coated with carbon and put in vacuum. A team from Germany and the US conducted the research using a new type of confocal, laser-scanning microscope, called 4Pi.

The researchers found that bordered pits are filled with a mesh membrane of nanofibrils which radiates from a thickened, solid central region called torus. When wood is injured, the torus and part of the membrane shift from the centre of the pit to one side to seal the pit opening. During the pit-sealing process, pectin, a polysaccharide that forms a ring around the torus, separates to formÃ”Ã‡Ãªan outer fringe while the bulk of the pectin gets pulled into the aperture to block it.

“There are many possible implications,” says Barry Goodell, professor at the Department of Sustainable Biomaterials of the College of Natural Resources and Environment at Virginia Tech. Goodell was part of the study.

Goodell says the finding has environmental implications as well. Fungi are major recyclers of wood biomass and enter wood through bordered pit membranes. Pit aspiration, thus, has a direct impact on the rate at which carbon from forests is cycled back into the environment, says Goodell.