How shrimp cultivation turned a mangrove forest into a saline desert 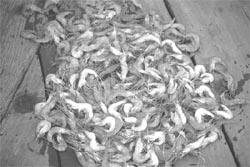 chokoria Sundarban in the coastal district of Coz's Bazar in southeast Bangladesh, once a reserved and protected mangrove forest, is deserted today. The roots provided a safe shelter to the fish shrimp and aquatic reptiles. But, today, most trees, animals (such as tigers, deer and wild cats), and fish species have disappeared. The area is a saline desert.

In 1929, the British government leased out 1,582 ha of Chokoria Sundarban to 262 landless families. The cutting of the mangrove thus began with human settlement. But deforestation reached an unprecedented scale in the 1970s and early 1980s when the Asian Development Bank (adb) and the World Bank gave funds to the government to promote shrimp farming for export. In 1997, the 228 ha of the forest was handed over to an influential person for shrimp cultivation. The following year, the department of forest handed over another 2,023 ha to the department of fisheries. And, in 1979, another 695 ha of forest land was given to the department. The adb finances for shrimp farming came in 1982 under the Aquaculture Development Project. With the adb loan of us $15.99 million, 115 plots of 4.45 ha each and a 16-km embankment were built.

The adb loan was followed by a us $26.5 million shrimp culture project designed by the World Bank and United Nations Development Program ( undp ). The loan was used for infrastructure development, which included preparation of 468 plots of 4 ha each. After infrastructure development like construction of embankments and sluice gates and preparation of plots, the shrimp farms were leased out mainly to people from outside the area. The adb- funded project was completed in 1986, while that of the World Bank was completed in 1993. The end result was the "ecocide" of the Chokoria Sundarban. Not surprisingly, nobody is ready to share the blame for destruction of the mangrove forests.

Today, fears are not limited to the disappearance of the forest cover. Many fears that shrimp farming has also severely damaged the soil of the Chokoria Sundarban. The soil of mangrove forest area contains acid sulphate in high concentration but mangrove trees prevent the increase in acid sulphate content. Experts fear that the shrimp culture can gradually increase acid sulphate in the soil to such an extent that regeneration of mangroves may become impossible. The land will be suitable for only salt and shrimp production.

Further, only a few individuals have benefited from shrimp culture. The local environment and the means of livelihood of the local people have been greatly damaged and the human habitation has become more vulnerable to cyclones and tidal surges. The population of local fish species have also reduced and some species have disappeared altogether.