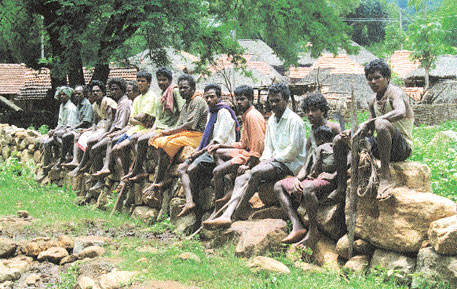 On the night of August 3 in 2006, there was a severe landslide in Kodipunjulavalasa village in the Araku valley, a tribal area under Paderu Tribal Development Agency in Visakhapatnam district. The disaster claimed 18 lives and injured about 30. More than a dozen houses of adivasis were destroyed.

The people in the village were sleeping when boulders hurtled down at 10 pm. There was no escape route as the village was encircled by a hill stream in spate.

At the time of the disaster, the area was in the grip of a storm and heavy rains brought on by a severe cyclone which crossed the coast at Puri in Odisha. The tribal settlements were located about half a kilometre from the spot of the landslide and were in a relatively stable, flat area. The landslip occurred on the uphill slope of the village at the confluence of three streams.

Similarly in October 2012, a train had derailed in Araku after a landslide that occurred when Nilam, a severe tropical cyclone, made landfall at Mahabalipuram in Tamil Nadu. A study done by the geology department of Osmania University in 2010, reveals that the Araku region of the Eastern Ghats is prone to such landslides.

Cyclone Hudhud, which is expected to cross the north Andhra Pradesh near Visakhapatnam on October 12, will be accompanied by winds that may have a speed of about 130-140 km per hour (gusting up to 155 kmph).

The state government has listed 520 villages in 170 administrative blocks in four districts in Andhra Pradesh—Srikakulam, Visakhapatnam, Vizianagaram and  East Godavari—which could be affected by heavy rains and strong winds during the landfall of Hudhdud. Many in villages in G K Veedhi, Chintapalle, Paderu, Nathavaram, Araku valley are poor, backward and located interior in the hillsides of the Eastern Ghats.

"The disaster management efforts will be generally more efficient in coastal areas and plains than the hilly areas," points out E A S Sarma, former secretary to the Central government. Hilly areas might suffer due to their disadvantageous locations, but district administration is making all efforts to mitigate the severity of the disaster, he says. The villages have been already alerted.

A majority of the tribal villages in the Scheduled Five areas of these four districts don't have even basic facilities like healthcare and electricity. Visakhapatnam shares 418 km border with Odisha, and many villages along the border are identified as Maoist areas by the Central and the state governments. There has been an administrative apathy all through towards these villages.