Tribals beaten up by TMC workers in Sundarbans 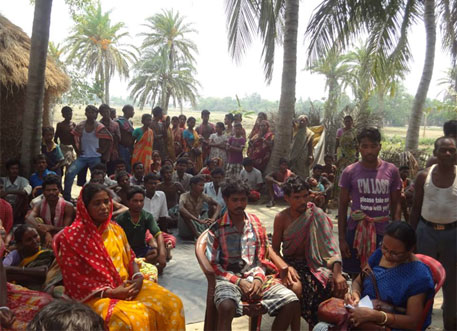 Ever since they voted in the general elections on May 12, Oraon and Munda tribals in West BengalÃ”Ã‡Ã–s Sundarbans delta are living in fear of violent assault. A day after voting took place, several people, including women from the Adivasi families, were allegedly beaten up by local Trinamool Congress (TMC) workers in Golbunia village of Sandeshkhali block in North 24 Parganas district.

TMC workers told residents of Golbunia that they have committed a mistake by voting for BJP in the general elections. The injured were cordoned off in the village and not allowed to seek medical help or register a police complaint. On May 18, five days after the assault, Golbunia residents filed a complaint but continue to face regular intimidation.

Last sunday after leader of Adivasi Vikas Parishad, Birsa Tirkey, visited the village, 52 year old Dulal Sardar was severely beaten up for accompanying Tirkey. “My brother has left the village fearing for his life. My daughter-in-law was also beaten up. We are living in constant fear,” says Subal, elder brother of Dulal.

“Local criminals want to evict us from our land. Without any evidence they are using the elections as a pretext,” a team of tribals visiting the state capital, Kolkata, to seek legal help told Down To Earth. TMC won the Basirhat parliamentary seat with a margin of over 100,000 votes. The BJP candidate, who came third, polled less than half the votes garnered by the TMC candidate.

Interestingly, the area is known to be a part of the Tebhaga movement, a violent peasant uprising across Bengal during the time India got its independence. Several tribal leaders were part of the movement, demanding that sharecroppers get two-third instead of half the share of crop due to them.

Beginning 1772, the British brought in tribals from central and eastern India to clear mangrove forests and generate revenue from agriculture in Sundarbans.

“The primary motive is to take away our land,” says a school teacher from the area referring to the latest spate of violence. “In most families the youth have left to work in other states. Converting agricultural land into prawn bheris has become a lucrative business,” he adds.

At the forefront of climate change risks, the Sundarbans delta is among the poorest regions in the country and is witnessing large-scale distress migration and trafficking. Prawn farms are popular among the wealthy for quick returns but have been disastrous for small farmers (due to saline water ingress) and for the fragile ecology of Sundarbans.

In another incident on May 27, TMC workers allegedly clashed with a group of BJP workers celebrating their impressive foray in Basirhat. Over 20 people from Rampurhat in Sandeshkhali are reportedly injured; at least five of them with bullet injuries have been rushed to the hospital. Possibility of a communal flare up looms large in the area.