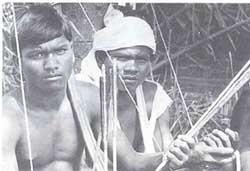 Tribals in Chhotanagpur, living in questionable safety around the 188 sq km Netarhat Firing Range, are preparing to launch a protest movement against the proposed acquisition of their land by the army's 23 Infantry Division. The acquisition would displace about 100,000 inhabitants and periodically uproot another 150,000 during actual test firing. Not that this is much of a surprise: Netarhat reportedly has a 30-year history of regularly dislocating the tribals. Those under threat -- Oraon tribals and other primitive tribes like the Birhors and the hunter-gatherer Asurs who already face extinction, without help from the army -- have organised themselves into Jan Sangharsh Samitis and are planning to hold a massive demonstration on April 9.

Quoting the Manoeuvres Field Firing and Artillery Practice Act of 1938, the army recently asked the Bihar state government to permanently acquire and develop a whopping 1,471 sq km into a heavy artillery training range. The state government not only walked into a wall of tribal dissent but is also facing objections from the forest department citing the Forest Conservation Act, 1980, which makes it mandatory to get permission from the Union ministry of environment and forests before forest land can be permanently acquired for non-forestry purposes.