Tribals protest all over India 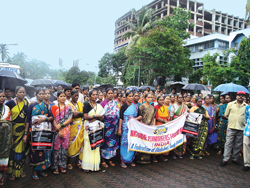 the International Day of World Indigenous People was observed on August 9. It was observed to support the demands of tribals for the urgent implementation of the Scheduled Tribes and other Traditional Forest Dwellers (Recognition of Forest Rights) Bill, 2006. They were supported by ngos and grassroots organisations. The day saw seminars, conferences, signature campaigns, silent marches and candle-light protests in various parts of the country.

"The tribals now want a concrete decision about their future. Our next step will be to pressure the government," Amitabh Behar of the National Centre for Advocacy Studies, said. He also said that a national convention of all adivasis rights groups is scheduled for late September.

"People now want a verdict and this is the way forward," said Ramesh Sharma of Ekta Parishad, the ngo organising the convention. "Around 25,000 people are likely to participate in the march. 17 states have confirmed participation. The march will begin on October 2 and end on October 28, which will be followed by peaceful protests and demonstrations in New Delhi," Sharma added. Activists from Amnesty International India, Ekta Parishad, National Forum for Forest Workers and Forest People and the National Centre for Advocacy Studies have approached prime minister Manmohan Singh for the implementation of the act to ensure a life free of threat of evictions.

A convention on 'Development Planning and Displacement' was also held in the capital from August 11-13. It was organised as part of Sangarsh 2007, an action initiated by a group of people's movement. They are demanding changes in the proposed National Rehabilitation and Resettlement Policy, 2006, likely to be tabled in the monsoon session of parliament. Fisherfolk and members of the coastal communities too held a national agitation on the same day (see box: Fishing for rights).