SEVERAL people living in Patyachapaani, a tribal hamlet inside Sanjay Gandhi National Park (SGNP) in suburban Mumbai, have been mauled by leopards in recent years. But they do not want to shift and are protesting the forest department's plan to relocate them in the forest fringe.

About three months ago, the park authorities submitted a proposal to the state environment secretary to relocate 30,000 tribals living in 56 tribal hamlets in the park, including Patyachapaani. They were to be resettled near Thakur Complex, a residential estate in Kandivali East on forest department's land.

In response, the tribals along with activists of Shramik Mukti Andolan, a non-profit working in the area for over 15 years, started protesting. They met the state minister for tribal development Padmakar Valvi on July 22, asking him to stop the relocation and demanded implementation of the Forest Rights Act, civic amenities and schools.

A senior official of SGNP said the Act does not apply to urban areas like Mumbai. "We have to make a choice between the people and the park. If people leave the park, it will be good for both," he said. Ulka Mahajan of Sarvahara Jan Andolan, fighting for the rights of tribals in Maharashtra, said both Madhya Pradesh and Chhattisgarh are implementing this Act in urban areas. "The Maharashtra government is not serious about its implementation. 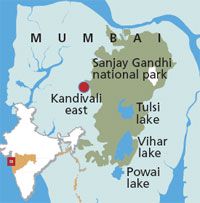 Therefore, this stance," she said. Villagers too don't buy the forest department's argument. "We have been coexisting with the animals for generations. We depend on the forest for our living," said Sevanti Dhadge, a resident of Patyachapaani.

The villagers fear they will lose access to the forest, spread over 104 sq km, once they shift.

The park authorities insist the tribals would have a better life outside the forest area, with housing facilities in multistoreys and better job offers. Vitthal Lad, an activist with Shramik Mukti Andolan, said most villages are already close to urban habitation. Patyachapaani, for instance, is a 12- minute walk from Thakur complex.

Most people in the hamlet work in the nearby urban settlements. Lad added that the tribals are uneducated and unskilled and so their earning capacity would remain the same.