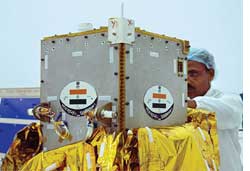 The Chandrayaan probe gets clicking

THE probing instrument on board Chandrayaan-I with the map of India painted on it dislodged from the spacecraft and hit the surface of the Shackleton crater on the moon on November 14. This crater in the south pole of the moon had earlier been identified by scientists as the place to search for water.

During this 25-minute descent to the moon, a high-resolution video camera installed on the moon impact probe captured images of the surface of the moon from very close range. A mass spectrometer the probe carried studied the constituents of the lunar atmosphere during the journey, while a radar altimeter recorded the distance of the probe from the lunar surface at different stages. While the images were being taken, one had to measure simultaneously from what distance a particular image had been taken.

The data collected by the three instruments on the moon impact probe will help prepare for future landing of instruments and manned missions to Earth's satellite.

The Indian Space Research Organisation's (isro's) Chairman Madhavan Nair said the probe sent clear images and vital inputs for future landings on the moon (see '2008: a lunar odyssey', Down To Earth, November 16-30, 2008). "The first pictures are very clear. Some of the craters identified by earlier missions required better resolution. Now we can see them with very fine resolution, which should give good input to those studying the moon's surface," he told the media. Instruments on Chandrayaan-I have also become active and will be orbiting the moon aboard the spacecraft for two years.