True to its metal

Metal foams are useful in building lighter and safer vehicles 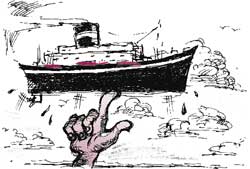 scientists are employing various techniques to develop metal foams that are sound and heat absorbent, lightweight and fireproof. These unique properties of the foams could soon attract wide-ranging applications in manufacturing cars, ships and aeroplanes. Metal foams are made up of metals such as aluminium and require less material to fill the same space. The foams save a lot of metal and weight, without losing the strength of original materials (New Scientist , Vol 155, No 2101).

Joachim Baumeister and his colleagues at the Fraunhofer Institute for Applied Materials Research in Bremen, Germany, devised one way of producing metal foams in 1990s. The technique includes using powdered metal and mixing it with a foaming agent that decomposes to give off gas when heated. The mixture is then crushed and heated again. Once the metal becomes soft, it forms bubbles in the semi-molten metal to create a foam-like structure. Though the technique is only used to produce aluminium foam, it can also help in manufacturing foams of other metals such as tin, zinc and many alloys.

A researcher named II Joon Yin at the Alcan Corporation in Ontario, Canada, has developed another method of producing aluminium foams. The technique envisages a bath of metal aluminium with air jets bubbling up through the metal. The air bubbles form a head on the cylindrical container of the molten metal that is drawn off on a plate and cooled into sheets. Then alumina or silicon carbide fibres are used to keep molten metal thick enough to maintain the bubble structure even after it is cooled.

McDonnell Douglas, the American Aerospace company, is also investigating a method to develop such foams. In this process, a container filled with metal powder is pressurised with an inert gas such as argon so that the gas fills tiny gaps between the particles. When the container is heated, the metal particles fuse to each other. During this process, the gas is trapped in spaces between the particles. The resultant is rolled out and again heated in a furnace to produce foam.

Metal foams can be one half to one fifth of the density of the bulk material depending on the method applied to produce the foams. Still, such foams are strong enough to be used in body parts of aeroplanes. Diverse applications of metal foams have generated special interest in shipbuilders. Its use can help reduce the weight of ships and increase their speed. A lighter deck makes a ship more stable because less weight above the water line reduces its chance of capsizing.

Aircraft manufacturers have been using aluminium alloys for long. But there is a serious drawback of aluminium because it rapidly catches fire. Unlike the bulk metal, metal foams are basically fireproof. A theory suggests that foams prevent heat from being conducted into the metal. Heating also coats the surface of foams with a naturally protective layer of aluminium oxides, leaving very little unprotected aluminium that could catch fire.

Manufacturers in the Europe are planning to use aluminium foams as a part of the fire wall that separates a passenger compartment with the engine. It would help cut down engine noise. Aluminium foam can be made a good sound dampener with a little variation in its shape and size.

The shape of foams is such that they can absorb the energy of an impact. This property of foams makes car driving safer. The most promising applications include energy absorbers for frontal and side impact in the transport industry. During a crash, the myriad cells in the foam would collapse and thus soak up the force of impact.