True to the metal 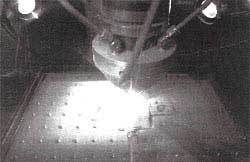 manufacturing accurately shaped metal components has always been a difficult task for industry. Now, a technique called laser-engineered net shaping (lens) has been developed by a team of researchers led by Clinton L Atwood at Sandia National Laboratories, usa that would help fabricate precise and complex parts such as tools and dies, directly out of the metal powder (Scientific American , Vol 277, No 2).

In this process, a continuous thin stream of finely powdered metal in argon gas is placed on a working surface where it is illuminated by an industrial laser. It melts a few milligrams of the powder, that later fuses onto the surface. Then engineers use computers to move the surface along a horizontal plane according to the need and shape of desired component.

The researchers say that the technique could be used to build a hollow bar of tool steel of 20 cm within a few hours. For the same purpose, conventional methods would require a much larger time. The technique can even be helpful in fabricating superalloys and high melting point materials such as tungsten. According to Atwood, the lens technique effectively shapes metal parts so that there could not be any detectable pores and cracks.

As only a small part of the metal powdered is molten at one time, it cools in fraction of a second. So the less soluble components of a molten alloy do not get time to separate. This is the reason that lens- made parts are stronger and smooth than those produced by conventional methods.

Similar methods can be used to build ceramics through a layering process. The researchers at Sandia National Laboratories are now planning to combine both the processes within next three years that would enable them to fabricate parts of variable metal ceramic blends.