Trust the gut on this one 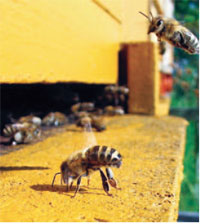 NINETY per cent of the flowering plants on this planet cannot bear fruit if they are not pollinated by bees and birds. The rate at which bees are disappearing from their hives does not bode well for the future of such plants. The colony collapse disorder (CCD) continues to mystify scientists and beekeepers alike. The precise cause is still unknown. A team from the University of Illinois perused the guts of healthy and infected bees for some answers. Entomologist May R Berenbaum and colleagues collected healthy bees from Illinois and infected bees from the east coast and the west coast of the US. Damaged genetic fragments were evident in the guts of infected bees. The fragments, called ribosomal RNA (rRNA), form cell components called ribosomes— protein manufacturing units. Parasites find it easier to attack a bee’s body by penetrating its gut wall. This explains why the team examined the bees’ guts. The rest of the insect’s digestive tract is covered on the inside by a thick, protective layer called the cuticle. After entering the body, the parasites take over the cellular machinery to achieve the replication of their own genes. The first step towards this is protein production. Hence the team concluded that the rRNA litter in the infected bee guts was from a pathogen overload. The next step was to confirm the connection between parasitic destruction and CCD. From the gut matter the team detected and identified genetic markers of eight parasites linked to the disorder: five viruses, one bacterium, one fungus and a single-celled protozoan. The parasites’ distribution varied between the infected bees from the east coast and the west coast. The common point was that the litter of rRNA was missing only from the healthy bee guts.

“But CCD is not caused by a single agent,” said Berenbaum. Other factors aid and abet. For example, the bee gut releases detoxification enzymes that help fortify its immunity. But if the pathogens can still turn it into a haven of their own, it means the bee has low immunity. It might be malnourished. The parasite’s job is easier then. Exposure to harmful chemicals is another example. The researchers hope to use the genetic fragments as a diagnostic tool for sick bees. “This is a marker that predicts the bees will soon face trouble. We hope that someone could connect this to a precise cause that can be treated,” said Jay D Evans from the US Department of Agriculture’s Bee Research Lab, a partner in the study. As for the remedy, the team suggests modification of the gut. Beneficial bacteria inserted in the bee guts will release their own detoxifying chemicals. The bees can also be bred to have thicker gut walls. But that requires genetic manipulation which raises ethical concerns. The study is relevant but not practical, said entomologist Dewey Caron from the Delaware University, USA. The most a farmer does to avoid CCD is ensure bees get good quality nectar and a better mix of pollen. Extra protein in the diet helps. When building a hive the keepers use new foundation sheets for the honeycombs instead of those from an abandoned hive. This keeps germs from the old hive at bay