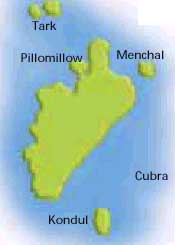 tribals in the Kamota island, part of the Nicobar Islands, have protested against the defence establishment's attempt to re-install the field firing range (ffr) near the Pillomillow side of the island.

The range's lease ended in February 2004. Talks to renew it have sparked protests from the tribals who had to shift to temporary shelters in the Pillomillow side of the island after the tsunami.

Says Asha Masjid, tribal council leader, Kamota, "The tribals won't allow the re-installation of ffr as it will affect forest and fishing in the area and the smoke will cause health hazards. The local people feared the range even before the lease ran out."

Rashid Yusuf, spokesperson, tribal council, Kamota, adds, "The firing practice raises unbearable noise. Our main crops like coconut, areca nut and banana are also affected. We have taken up this issue with the district administration."

The authorities were, however, noncommittal. Amit Kumar, assistant commissioner, Nancowry and Kamota island, said, "As of now, we have no reports of protests against the firing range. The firing practice is also not operational right now."

K Jalandar, chief staff officer, headquarters, Andaman and Nicobar command, says, "The firing is done with pistols and rifles of insas and 7.62 mm slr's only, which are not hazardous. The proposed sites in Kamota are also well clear of the tsunami relief camps."

Samir Acharya, head of the ngo Society for Andaman and Nicobar, contends, "The army found alternative sites in Batti, Malay, Bomka and Trinket unsuitable due to rough terrain and thick vegetation. We suggest the areas of the Little Nicobar and the Great Nicobar, although they have thick vegetation. Since the army has the necessary infrastructure and provisions to clear up the area, it should be ideal for them.