Tsunami warning system not in place 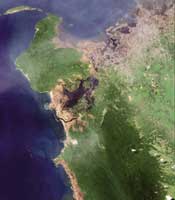 technology cannot always substitute sound preparedness on the ground; Indonesia learnt it the hard way when a tsunami triggered by an earthquake off the island of Java killed hundreds of people last month. An interim tsunami warning system declared operational in the Indian Ocean region barely a month ago did not help as the waves towering up to six metres killed 700 people and displaced nearly 50,000 families.

A meeting of the Intergovernmental Coordination Group, which is setting up the Indian Ocean Tsunami Warning and Mitigation System, convened in Bali a fortnight later admitted that the tsunami exposed glaring gaps in warning system, which was in the making for the last 18 months.

Though seismographs and tsunami-detecting buoys put in place after the 2004-Asian tsunami did transmit data in real time to the Hawaii-based Pacific Tsunami Warning Center and the Japanese Meteorological Agency to issue the warning 17 minutes after the sub-sea tremblor, it wasn't of much use. Indonesian research and technology minister Kusmayanto Kadiman confessed that the goof-up was mainly due to a rigid bureaucracy, which failed to make use of the critical minutes available before the disaster struck the shore. "The most valuable lesson we got from the incident was that we relied too much on a bureaucratic structure," Kadiman who participated in the Intergovernmental Coordination Group meet, said. "We send the information to governors and mayors but these individuals are not on a 24-hour alert," he said.

"Such near-shore quakes (the 7.7 magnitude quake occurred just 200 km off the Java coastline) do not leave much time for a warning," said Sailesh Nayak, director of Indian National Centre for Ocean Information Services, Hyderabad. If the quake is big enough, people should be on alert, even if it does not generate tsunami waves, he said.

There are still no sirens on the beaches of Java, Indonesia's most crowded island. Getting information quickly across to people is thus difficult.

Another issue plaguing the regional tsunami warning system is that there isn't much cooperation among the countries when it comes to sharing data. Till such problems are sorted out, the regional warning system will have to depend on the Pacific tsunami warning centre for analysing the data generated by seismic instruments, and also on deep sea stations installed by member countries together with assistance from some western countries.

This means precious time is being wasted before a warning can be issued.