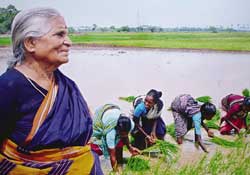 The prawn farming industry in Nagapattinam, Tamil Nadu has bounced back from the losses of the tsunami of December 26, 2004, causing irreperable damage to agriculture. The tsunami hit farmers of Nagapttinam are suffering the double whammy as the prawn industry chokes-off agriculture.

Prawn farming in Nagapattinam district picked up around 1991. By the time tsunami hit, the area had almost a 1,000 prawn farming units flourishing. Nagapattinam always provided the perfect location for shrimp business -- a long strip of land adjoining the sea. The farmers and residents rose in protest. Today, as the farms increase in size and their impacts worsen the farmers are livid.

Tharangambadi and Sirkali are two taluks where the anti-shrimp agitation is at its peak. The impact of shrimp farms on livelihoods is high here due to the total takeover of the coast and salination of irrigable land. As one enters Chinnamedu village of Tharangambadi, one can see the prawn farms sprawl from one end of the village's shore to the other.

The farm was in existence even before the tsunami but has been expanded now. "Earlier we had two ponds, 0.5 hectares each. Now, after the tsunami, we have 14 ponds," says the security guard at the Samudra Lakshmi Company run prawn farm. They have plans to expand further. According to the village traditional fisherfolk's panchayat, it is owned by a trader from Mayiladuthurai. Many prawn farm owners are not local farmers but traders and corporates from outside.

The Chinnamedu Meenavar Panchayat, and residents of Chinnamedu have petitioned the collector about this prawn farm. "The proposed farm is located within 150 metres from the high-tide line. This is a violation of the Coastal Regulation Zone (crz) Act, 1991. Moreover, the prawn farm, when operational, will block the current route which the children of our village take to attend school in nearby Kumarakkudi," says Vaithialingam, president of the panchayat, in his petition.

The villagers of Chinnamedu say that similar expansions are happening at Vanagiri in Tharangambadi and also in the Nagapattinam and Keezhayur blocks, mostly on tsunami-affected land. A drive from Nagapattinam to the famous Velankanni shrine supports this claim. "Once lined by green paddy fields, a trademark of the Cauvery delta, the district is today lined with prawn ponds," says Krishnammal Jagannathan of the Land for the Tillers movement, a offshoot of Vinobha Bhave's Bhoodhan (land donation) movement. 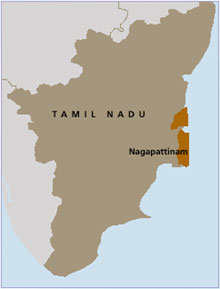 There are various reasons for the move to prawn farming. "Compared to agriculture, prawn farms are more profitable and require less labour. Also you can get the whole of your investment returned with the first crop itself. The quality of the land also is not a problem but you need to be near the sea or a creek. However disease of seedlings is a major problem and it hampers profit totally," says Poomalai who was into shrimp farming earlier in Keezhyur taluk.

Landowners at many places in Tharangambadi and Sirkazhi prefer to sell away their land. The shrimp farms block the drainage canals at the tail end of the Cauvery delta. The prawn farms prevent rainwater from reaching the sea. So inundation of agricultural fields in the monsoon is an annual affair. "In summer they draw water from creeks which results in salination of groundwater even in the adjoining land," says Jesu Rethinam of the campaign against shrimp industries--a network of ngos working on coastal and environmental issues, which did an extensive survey of the shrimp farms.

"The impact of tsunami was aggravated due to the shrimp farms. In Pudukuppam, Cuddlaore district, for instance, because of the bunds of the farms, water could not spread. So it entered the hamlets. Pudukuppam got washed away. It flattened the sand dunes which act as a natural barrier," says Poovarasan of Chinamanickapangu village of Tharangambadi.

The fisheries department, the local regulatory authority, comes forth with a count: "1,015 shrimp farms in Nagapattinam. Out of these, 469 are licensed. 533 have applied for approval. 13 are unapproved". This detail comes as a response to a right to information petition filed by the Bay of Bengal Fish Worker's Union. They are organising fishworkers in Nagapattinam to demand a fisherfolk welfare board and worker status for fisherwomen among others. The union was formed after the tsunami, with the rich and powerful trawler owners voiceless for once. In the long list of approved farms Samudra Lakshmi was not present. "Most of the time these expansions happen in existing farms and they can claim as if it existed from before," says Kumaravelu, the coordinator of the union.

When contacted, S Kumar, in charge of aquaculture in Nagapat-tinam's fisheries department, told Down To Earth that "majority of suitable area has already been developed. So there is no increase in the farms". When asked about the reason for the pending approval for almost 533 farms, which already exist, he cited administrative reasons. While the date of approval of the 469 farms is known, the department has no data on the date of application of the 533 pending applications.