The p53 protein's association with tumours is probed further, leading to revelations about tumour growth 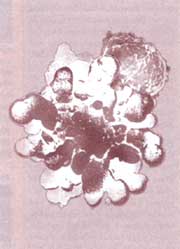 DESPITE their oxygen deficiency, which should cause them to die or should stunt their growth, turnours often continue to thrive. Why is this so? Recent work by T G Graeber and colleagues of the Stanford University School of Medicine in the us suggests that the absence of an all-purpose protein called p53 may be responsible for the inexorable growth of WN tumours (Nature, Vol 379, 1996).

The p53 has been associated with tumour suppression. However, the route of tumour suppression that is followed by it has turned out to be more subtle than was previously believed. It was commonly assumed that normal cells had high levels of p53, which, because of the protein's ability to bind to specific cell-dividing DNA sequences, could regulate the rate of cell division. However, when the protein mutated, this regulation was removed and cells kept dividing, thus causing a tumour to form.

Later studies showed that this hypothesis needed to be modified because, contrary to expectation, normal cells did not express high levels of p53. It was only when a situation of urgency arose, as might be caused by DNA damage, or, as Graeber and his team now show, by oxygen starvation (hypoxia), that the p53 gene was activated.

The research team is experiments involved rat cells called fibroblasts that had been engineered to express a tumour promoting gene, c-myc. The researchers compared the behaviour of tumours that were induced by activating c-myc in cells lacking p53 with the progression of those same tumours when induced in fibroblasts containing normal p53 genes, both under normal and hypoxic conditions. The experiment found that hypoxia-induced death was strongly correlated with the presence of p53. There was a 3.5 to four-fold decrease in the frequency of cell death caused by oxygen deprivation when p53 was lacking. In other words, p53-deficient cells survive better than normal cells when they encounter low levels of oxygen.

Further experimentation revealed that after beginning with a 1: 1,000 ratio of normal (p53pius) to deficient (p53minus) cells, it took only seven rounds of hypoxia for two-three days, followed by recovery for three-five days, @or most of the cells in the culture to be of p53-deficient type. The findings suggest a route for tumour evolution. A tumour is initiated, conceivably on account of the malfunctioning of some gene other than p53. Perhaps, as the experiments reveal, the tumour survives due to mutated p53 cells.