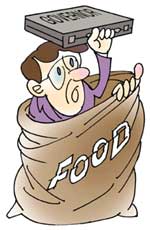 The Turkmenistan government has dismissed five regional governors in the face of unrest caused by a severe food crisis. Though the country faces a crop failure this winter, the government says the severity of the bread shortage has been exacerbated by falsified data submitted by the regional governors.

A recent audit revealed that officials had falsified data on the winter wheat and cotton crops, following which Turkmen president Saparmurat Niyazov dismissed the governors.

Officials had reported complete fulfilment of the winter wheat sowing programme. In reality, "wheat-sowing amounted to less than 50 per cent (of the established targets) in each of these regions", Niyazov told his cabinet at a televised session. "In 2007, there will not be enough bread for everyone," he added.