Turned on its head 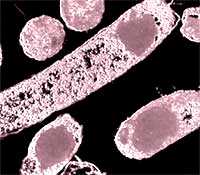 genetic engineering is primarily based on the existence of a class of enzymes known as restriction enzymes. These enzymes are made by a large number of bacteria and have the ability to cut dna at or near specific recognition sites. Because of this property, when a piece of foreign dna , say viral dna , enters a bacterial cell, the foreign dna gets chewed up (restricted) and the virus is unable to infect the bacterium.

Ichizo Kobayashi of the Institute of Medical Science, University of Tokyo, Japan, has been attempting to turn this wisdom on its head. According to him, rm systems are an instance, not of bacterial self-defence, but of viral wisdom. Kobayashi's thesis is that rm systems represent an instance of selfish dna attempting to maximise its own reproductive success. Consider first the weak points in the conventional picture that views rm systems as agents of cellular defence. Defence is short-lived because occasionally a piece of invading viral dna can get modified before getting restricted; once that happens both it and its descendants attain a protected status. Next, a tremendous degree of diversity combined with high specificity is seen in existing rm systems; on the face of it, a common and generalised defence system might have worked just as well. Some rm systems are known to be transmissible from bacterium to bacterium via extra-chromosomal dna elements known as plasmids, and it is puzzling why one cell should make available its own special machinery for defence to other cells, even unrelated ones.

On the other hand, and in support of the hypothesis that rm systems exist to serve themselves rather than the bacterium, plasmids that back the restriction function (but retain the modification function) tend to be lost from bacteria. Further, the benefit that accrues to a host bacterium that carries an rm plasmid can also be explained. If a cell loses plasmid, the number of restriction and modification enzymes that its descendants carry keeps falling with each cell division. Eventually, a stage is reached at which the level of the modifying enzyme is insufficient to prevent restriction; and if that happens, the cell dies.

One can picturesquely describe the evolutionary outcome, in which a bacterium has to live with plasmid-borne rm systems that it does not need, as a case of bacterial addiction. The rm gene pair (whether carried by a plasmid or not) can be described as a 'selfish' genetic entity in the sense that it ensures its persistence in the host even though, strictly speaking, it does not confer any evolutionary benefit to the host.

The wide divergence in rm systems is also an expected consequence of each member attempting to maximise its own reproductive success at the expense of others. If two rm plasmids share a common recognition sequence, the chance loss of one of them will not lead to any serious consequences for the remaining dna : the modification enzyme of one can protect a restriction site from cleavage by the restriction enzyme of the other. On the contrary, if two rm systems recognise different sequences, a bacterium that harbours both pairs is forced to live with both. In short, the only way for a new rm system to spread is by diversification.

The most thought-provoking of Koboyashi's generalisations from the model is that meiosis, the shuffling of genes that is the hallmark of sexual reproduction, may have evolved as a defence against rm systems. This is because as a result of meiosis, a chromosome free of inserted sequences can be generated by replacing a region containing foreign dna with a region free of it and brought over from a sister-chromosome.