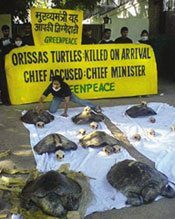 Delhi police booked three Greenpeace activists for protesting outside Orissa chief minister Naveen Patnaik's residence in the capital. The activists were booked under the Wildlife Protection Act 1972. They have been accused of violating the Wildlife Protection Act by transporting carcasses of Olive Ridley turtles from Orissa to Delhi. Greenpeace condemned the decision to book the environmental activists under an act meant to protect the very interests that had motivated the activists to confront the chief minister. "It is shocking that officials of the law chose to prosecute those who take action to uphold the law, instead of those who flagrantly violate it, or those abusing their positions of responsibility," said Ashish Fernandes, one of the activists. "Given that the chief minister has abdicated his responsibility to protect the endangered Olive Ridley turtles, we consider him to be a violator of the Wildlife Protection Act," he added.