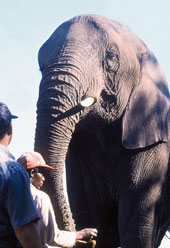 Zambia and Kenya are set to lock horns over ivory trade at the next Convention on International Trade in Endangered Species (cites) meeting scheduled for November 2002. While a proposal to lift the international ban on ivory trade has been put forth by the Zambian government, Kenya is likely to take a very strong stand against the resumption of the ivory trade. The latter feels that such a move is inextricably linked to illegal ivory trafficking and killing of the pachyderms in its elephant ranges. Even as Zambia believes that lifting of the ban will allow it to sell 17 metric tonnes of ivory, there are apprehensions that the proposal will allow poachers to indulge in illegal smuggling under the garb of legal ivory trade. Zambia is in dire need of financial resources to effectively manage its wildlife. The revenue realised from this trade is be directed to the core functions of conservation of wildlife. South Africa has already drafted another proposal to lift the ban in time for the November cites meeting.