In the remote regions of China, American and Chinese doctors fight against several diseases, including the Big killer: cancer 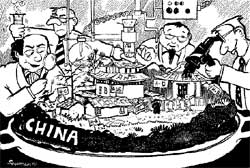 linzhou , a tiny mountain province in China, has seen a lot of action lately. Here, in a nondescript red-brick health centre, next to a metalworking shop that could be perfectly at home in the Middle Ages, us and Chinese doctors operated recently on Chinese peasants with high-tech medical equipment to treat cancer of the oesophagus.

"The swallowing disease", as the Chinese have called cancer for centuries, accounts for a shocking 20 per cent of deaths in this rugged region. Millions die every year from this form of cancer alone.

American doctors say the procedures being tried here -- involving Chinese diagnostic techniques and Japanese-developed experimental surgery -- could help fight what has emerged as one of the fastest growing cancers in the us -- adenocarcinoma, which mostly affects middle-aged African-American men.

The cooperative research in this mountainous region of China is one of hundreds of projects involving Chinese and American specialists.

Initiated in the 1970s, shortly after President Nixon's historic first trip to China, the us -Chinese scientific cooperation has grown into one of the underpinnings of Washington's relations with Beijing and into one of the most productive relationships in the world, according to scientists on both sides.

"Science was used as a tool to normalise relations," says Alex Hogan, an official with the National Science Foundation now at the White House Office of Science and Technology Policy. Since the 1980s, the us government has funded numerous science and health-related projects in China, including running the Shanghai Institute of Parasitic Diseases -- a centre for tropical medical research.

"The Americans have a long-term approach," says Dong Zhiwei, director of the Cancer Institute and Hospital at the Chinese Academy of Medical Sciences in Beijing. "Most of them are not here to grab a few samples, write a paper and leave, they are looking deeply for solutions."

American doctors and scientists are studying breast cancer in a Shanghai textile factory, and lung cancer in a tin mine in the Yunnan province. They are crawling through cave homes in the arid west to determine radon levels and working on a genetically-engineered vaccine for a parasite that affects 150 million in China annually.

Experts are taking sperm from chemical industry workers in Wuhan in a fight against liver cancer. They are looking into the genetic basis of asthma in Anhui province and probing the relationship between diet and longevity in a nationwide study using an enormous base of 500,000 subjects.

"They have got parasites, they have got malaria," says Roy Schwartz, head of the New York-based China Medical Board -- an organisation that supports medical research in China. "They have some of the highest incidences of certain cancers. They have 56 identified minority groups, so they are a genetic gold mine. They are worried about aids . They have hepatitis a , b , c , d and e . They are a researcher's dream, a living laboratory."