"There is radiation everywhere on earth. Mining in Nalgonda will not increase it." This comment of S D Prasad, adviser to public sector undertaking Uranium Corporation of India Limited, typifies the Indian authorities' disregard for the impact of uranium mining on human health and the environment 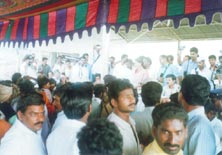 "there is radiation everywhere on earth. Mining in Nalgonda will not increase it." This comment of S D Prasad, adviser to public sector undertaking Uranium Corporation of India Limited (ucil), typifies the Indian authorities' insouciant disregard for the impact of uranium mining on human health and the environment. It was with this mindset that officials approached the August 19 public hearings on ucil's proposed extraction of the radioactive metal from Andhra Pradesh's (ap) Nalgonda district. Predictably, the local people's apprehensions were left unaddressed.

The Andhra Pradesh Pollution Control Board had originally planned to organise a single hearing at Peddagattu village, which is located on a remote hillock in Nalgonda. Seemingly, ucil and state government officials wanted to keep attendance to the bare minimum so that they did not have to field uncomfortable questions. But the board was forced to hurriedly arrange another hearing on the same day in the relatively accessible Pedda Adiserapally, (the block development headquarters) after the ap High Court intervened in the matter.

Strong protests marked the meeting at Peddagattu, where the officials failed to come up with satisfactory answers to people's queries on health hazards posed by the mining activity. In fact, members of the public and civil society groups alleged that ucil tried to furnish misleading facts and figures. The second hearing saw the presence of a large police force. Not only was the people's movement monitored strictly, they were said to have been stifled. J Rama Rao of Forum for a Better Hyderabad, a non-governmental organisation, asserts: "The entire affair was preconceived and they (the officials) decided not to listen to anyone."

Significantly, ucil's fresh bid to mine uranium in Meghalaya was also stiffly resisted. The company's temporary lease for exploration was recently withdrawn by the northeast state (see: "Keep off!" July 31, 2003).
ucil proposes to mine uranium from deposits in Lambapur and Peddagattu villages of Nalgonda district. The company also plans to install a reprocessing unit at Mallapur, about 18 kilometres (km) from the mine site. The identified mines in ap have 11.02 million tonnes of uranium ore, which will be extracted in about 20 years. The total leasehold mining area covers about 527 hectares (ha) and the processing plant is spread over 304 ha. ucil will be spending around Rs 400 crore on the project.

Since February this year, when the state government made ucil's proposal public, there have been widespread protests against the project. Curiously, after the initial announcement, the state authorities maintained a studied silence on the issue rather than sensitising local people to the health hazards of uranium mining. "The residents have a right to know about the ramifications of the venture," contended Rao after a visit to the villages. It was only in July that the subject was brought up again when notices regarding the public hearing were published in newspapers.

Allurements such as employment opportunities were then dangled to win over the residents. "The authorities have told us that Mallapur will be transformed into a mallepuvvu (jasmine) and developed on a par with hi-tech Hyderabad," says Satyanarayana, a carpenter of the village who is planning to sell his 1.21 ha to the company.
Prasad divulged details of the mining plan in Hindi during the public hearings, but the statement was translated into Telugu for the local people. There was, however, no such provision with regard to ucil's environmental impact assessment (eia) of the project.

ucil informed the gathering that only a fraction of the area to be acquired would come under forestland. But the fact is that about 445 ha out of the total site area of 527 ha lies in the Yellapuram reserve forest. The buffer zone of the notified Rajiv Gandhi Tiger Sanctuary falls within this belt.

ucil also claimed that ore deposits at the site contained high-grade uranium. But its own eia and environmental management plan dated March 2003 state that the level of the metal is only 0.02 per cent. ucil chairperson and managing director Ramender Gupta astoundingly uses the latter figure to portray the venture as being environmentally sound. "The uranium content in the Nalgonda ore is 0.02 per cent, while that in the mines of other countries like Canada is 2-12 per cent. This translates into lower risks (to human health and the environment in ap)."


Experts charge the company with remaining mum on the fallout from the possible contamination of waterbodies located in the area. It may be noted that the proposed mines are just 1 km from human habitation, hardly 10 km from Nagarjunsagar dam and barely 4 km from Akkampalli reservoir -- Hyderabad's new source of drinking water.

The Movement Against Uranium Project (maup), a state-level umbrella group of 20 civil society organisations, emphasises that radioactive mine wastes would enter these waterbodies. Mines, Minerals and People, a national federation of anti-mines groups, has calculated that after 20 years of mining about 7.5 million metric tonnes of potentially radioactive waste would be produced. Out of this 99.98 per cent will be left behind.

"Chances are that the two major waterbodies will be severely affected. And ucil has failed to furnish any concrete evidence to the contrary," points out Ravi Pregadda of maup. Indeed, the company has so far not disclosed how it plans to manage and monitor radioactive waste discharged from the mines. When pressed on the issue of radiation hazards, Prasad said perfunctorily: "The people will not be adversely affected." Gupta maintains that "there will be no threat to any waterbody", and justifies his stand claiming that "there is no documented proof of any uranium mine accident in India".


Sources reveal that the state government has already agreed to issue the mining licence for the Lambapur-Peddagattu project. According to local officials, a technical committee has studied the ucil proposal and hasn't found anything wrong with it.

But T Chatterjee, principal secretary in the state environment ministry, admits that it is a highly hazardous, "red category" industry. "The public hearing was the first step in assessing the safety of the project. A seven-member expert committee will evaluate the proposal after the report of the public hearing is submitted. The site of uranium ore deposits cannot be changed. ucil can, however, be asked to locate the processing unit at a greater distance from drinking water sources," stressed Chatterjee.

Meanwhile, the issue has snowballed into a major political row in the state with the ruling Telugu Desam Party (tdp) drawing flak from the opposition. Three days prior to the public hearing, parties other than the tdp joined hands to protest against the mining project. The Congress even despatched a missive to chief minister Chandrababu Naidu, demanding that the venture not be cleared till all the environmental and health concerns are dealt with. The Bharatiya Janata Party has set up a committee to study the proposals and may urge the Union government to scrap the project.


The genuine public outrage aroused by the project and the political undertones that the controversy has acquired have jolted India's nuclear programme. With the country virtually exhausting its existing uranium deposits in Jharkhand's Jaduguda town, the Department Of Atomic Energy (dae) was banking on the ap mines.

At the current levels of demand, the existing mines in Jaduguda can supply yellowcake only till 2004. Though refusing to provide current production figures citing it as "classified information", a senior official of ucil based in Jaduguda says: "After 2004, India will have to mine additional deposits."

It will take approximately three to four years to commence fresh mining activity and process uranium. And the country's present requirement is huge. Even as the dae has set an ambitious target of generating 20,000 megawatts (mw) of electricity by 2020, the nuclear weapons programme needs large amounts of uranium and plutonium from spent uranium fuel. The 14 functioning reactors have an installed capacity of 2720 mw. In a desperate move, the Bhabha Atomic Research Centre (barc) has launched a project to extract uranium from seawater in Mumbai.

So far as ucil is concerned, its very credibility is at stake. Before embarking on the Andhra mines venture, it was shunted out of Meghalaya where it was to mine the country's largest uranium reserves. Though the company has been exploring the West Khasi Hills and Domiasiat village in the state over the past three decades, local people have kept it at bay since 1996. They point to ucil 's disastrous foray into Jaduguda.

The public sector undertaking is said to have bypassed public concern over the ill-effects of radiation in the Jharkhand town. "The condition of Jaduguda mines and the trail of death and devastation they have left, will always be a blot on ucil's reputation," avers Sanghamitra Gadekar, an activist who surveyed affected areas in Jaduguda and found widespread deformities. Though ucil claims that they are not linked to uranium mining, the company has not made public a health survey it conducted on the residents.

At a time when the nuclear establishment is caught between its present need and poor track record, the recent public hearings presented it with an opportunity to redeem itself. But the chance was squandered when ucil trivialised the occasion. All eyes are now on the collector of Nalgonda who will soon hand over a report on the proceedings of the two public hearings to the state government.