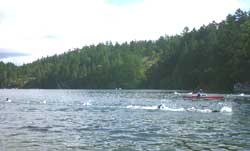 Killer Crocs
Humans encroach and animals pay the price. Officials recently killed four crocodiles blamed for killing at least 40 people. Following an intense outcry from villagers, the Ugandan Wildlife Authority (uwa) was forced to send a four-man patrol team armed with semi-automatic rifles to hunt down the reptiles. According to the uwa, residents were attacked by the man eaters while collecting water or fishing along the nearby shores of Lake Victoria. These attacks happened when settlements encroached deeper into areas populated by the giant reptiles.