"Extremotolerant" bacteria make a living in the deepfreeze lakes in Antarctica 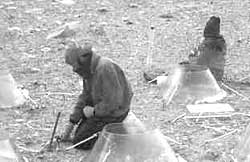 SCIENTISTS say there is life in the lakes of Antarctica which are perpetually covered by ice. An expedition to the McMurdo Dry Valleys led by John Priscu, a microbial ecologist from the Montana State University, USA, to investigate whatever life forms exist in the Antarctic waters turned out to be arduous, but the findings more than paid the price of labour.

As Priscu and his colleagues began drilling into the tO to 20-feet-thick layers of ice during their successive trips to Antarctica, they kept hitting a mysterious layer of gravel about six feet down. The irksome debris, which sent their tempers flying, however, turned out to be a place where diverse colonies of microbial life lived in little oases. Here, for about 150 days each summer, the ice softens enough and tiny pockets of liquid water form. The temperature in this coldest desert on Earth, when the microbes are active, is 0c to lc. But the optimal growth temperature for these organisms is about 15c to 20C. "This is really life on the edge," says Priscu.

This quality makes these microbes different from those found elsewhere in extreme conditions. Known collectively as "extremophiles" lovers of extremes these creatures thrive in places where scientists, as recent as 20 years ago, had assumed no life could survive. The new Antarctic microbes, according to Priscu, are "extremotolerant".

For five years, the team of researchers, kept on hammering the gravel layer, often cursing while carrying out the arm umbing exercise. Finally, they began to study the dynamics of melting and freezing. And in 1993, Priscu decided to study how gases escaped through the ice into the atmosphere and found a greater quantity of certain gases right where the gravel was. The peaks on Priscu's graph signalled the presence of certain bacteria busily manufacturing food by photosynthesis, taking nitrogen out of the atmosphere for their use, releasing oxygen and making carbohydrates from water and carbon dioxide. The researchers conducted DNA studies that showed that the organisms had actually originated in hnd, but may have been blown into the ice cover by the wind. Studies reveal that the microbes grow in the same place every year. "It's not transient," Priscu said.

This discovery could provide a model for how life may have once flourished on Mars and Jupiter's moon Europa, said accompanying commentators Roland Psenner and Birgit Sattler of the Institute of Zoology and Limalogy at Innsbruck University, Austria.