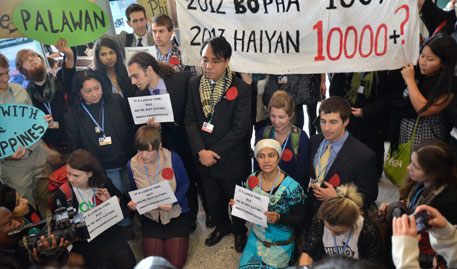 The international community’s response to the problem of climate change was in the form of a treaty—the Framework Convention on Climate Change under the auspices of the United Nations (UNFCCC).

The treaty, signed in 1992, had equity and justice as its core principles. But in the little over two decades that have passed, these core principles have got eroded and are in danger of being completely sidelined. Developed countries continue to dilute the principle of equity by interpreting the principles of UNFCCC differently and justify their inaction on climate change by using every ploy possible to transfer the burden of tackling climate change on to developing countries.

The trend of this shifting of the burden was apparent from the first Conference of Parties (COP) held in Berlin in 1995. Little has changed in terms of the core argument, as was evident at the 19th COP in Warsaw, held in 2013.

The principle of equity meant developed countries would be required to reduce emissions so as to stabilise greenhouse gas concentrations in the atmosphere at a level that would prevent catastrophic climate change. The developed countries were also required to provide financial and technological support to the developing countries, which would help them grow without following the same carbon intensive growth route adopted by the West.

At the first COP in Berlin, India, with the support of China, proposed a 20 per cent cut in carbon dioxide (CO2) emissions by developed countries. The Intergovernmental Panel on Climate Change (IPCC), however, predicted that 60 per cent cuts in greenhouse gas (GHG) emissions from the 1990 levels was needed to stabilise the climate, and prevent global warming. In political terms, 20 per cent was an ambitious target, but it was still not enough keeping in view the IPCC projections.

Then, in 1997, at the COP3 meet in Kyoto, the Kyoto Protocol was signed, though, it still had to be ratified and brought into effect. The principle of equity suffered a setback at this meet when 14 US senators made it clear that the US Congress is unlikely to ratify any treaty as it was “unfair to the US”—in other words, it lacked meaningful participation of key developing countries. The US indicated it wanted developing countries, too, should take on binding commitments.

At the next COP, at Buenos Aires in 1998, the stage was set for painting India and China as the key countries that stopped global action on climate change. At COP4, it became clear that the climate change battle would be won at the cost of developing countries.

The integrity of Kyoto Protocol  suffered a major setback when the US pulled out of it in 2001, under George W Bush. Later, without the United States, with reluctant ratification of 55 per cent nations, Kyoto Protocol came into effect in 2005. The Kyoto Protocol, a legally binding treaty under the UNFCCC, required 30 industrialised countries to cut their GHG emissions by an average of 5.2 per cent below 1990 levels. Since this commitment was to expire in 2012, countries were to start negotiating post-2012 commitments in 2005.  Developed nations, rather than owning up responsibility, insisted on “voluntary reductions”. Result: impasse.

Two years later, in 2007 in Bali, Indonesia, an action plan was agreed upon.

Titled, the Bali Action Plan, it set guidelines and a timeline for “up to and beyond 2012” agreement on climate change mitigation and GHG emissions reduction. This plan called for an agreement to be adopted at the 15th COP in Copenhagen, Denmark. The Bali Action Plan was based on enhanced action on four pillars: mitigation, adaptation, technology and financing. All these measures, the plan outlined, would be based on the principle of the UN convention—“common but differentiated responsibilities (CBDR)”.

According to the Bali roadmap, the formula was simple and ethical: rich countries would cut emissions by 40 per cent below 1990 levels, by 2020, and put new money on the table. In exchange, emerging economies would join the effort, reducing emissions growth at home, enabled by finance and technology from industrialised countries.

The two-year timeline culminated in a disastrous meet. The Copenhagen COP   in 2009 was marked by secret deals, deep distrust and little consensus among countries. The Copenhagen Accord held the potential to wipe equity off the table—it proposed voluntary action to reduce emissions, by all countries. The differentiation between rich and poor countries was gone.

The next round of climate talks, in Mexico in 2010, operationalized the Copenhagen Accord. A set of decisions, titled Cancun Agreements, was agreed upon.  While this agreement recognised that increase in global temperature must not exceed 2°C, it provided no road map for reaching this goal. It legalised the voluntary “pledge and review” mentioned in the Copenhagen Accord, under which countries were allowed to set their own domestic targets in the form of pledges which would be measured, reported and verified (MRV) but would not invite penalties if they are not met. Thus, the core principle of equity, on which UN Framework Convention was based, moved further out of sight. Cancun violated the right of the developing countries to grow with an equal access to global carbon space.

India’s efforts brought equity back in the global agenda at the Doha summit of 2012. However, it lost the momentum in the successive summit in Warsaw 2013 -  when major questions were raised on how to operationalise equity. The Warsaw summit also declared that national contributions were to be made by countries which would be assessed, reviewed and, if required, be raised in consonance with the 2°C degree target. The process has to be completed “well before” the Paris summit in 2015 where a new world deal would be formalised, which would come into effect in 2020. As a significant development, Brazilian government put forward a proposal of “Equity Reference Framework” to decide on the allocation of carbon space of countries in accordance with the principle of equity.

So, while the developed countries are bent on diluting the North-South divide, citing the growing economic and political clout of developing nations, developing countries like India insist on retaining equity. If there can be an agreed equity reference framework, one can still hope for an equitable legal framework by 2015 in Paris.