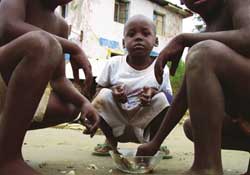 The United Nations World Food Program (wfp) has said it will withdraw food aid from Angola, citing its failure to mobilise donors to support the programme. In a recent announcement, it said the three-decade-long relief operations in the country would start winding up from the end of 2006.

wfp's current feeding programme in Angola was launched in April 2006, with plans to run until March 2009. The cost was estimated at us $90 million, but the programme received only 22 per cent of what was appealed for. wfp says the reason behind such a reluctant response is that they expect Angola to use more of its sizeable oil revenues to help itself. Angola is the second-biggest oil producer in Africa. wfp has already begun talks with the Angolan government on handing over the remaining food stocks of around 13,200 metric tonnes, stored in the states of Luanda and Lobito. "The government had already begun to take over school feeding across the country; Angola has been at peace for four years but de-mining the countryside and replacing infrastructure is a time-consuming process," the deputy director of wfp, Sonsoles Ruedas, said in a media statement. The agency now plans to run an office in Luanda from January 2007 to provide technical assistance to the Angolan government.

wfp began working in Angola in 1976 with the onset of a civil conflict that ended in 2002, supporting the process of reconstruction and repatriation of Angolan refugees. However, the suspension of targeted feeding has raised eyebrows in several international health organisations, as the move will worsen the country's present scenario it has one of the world's highest child mortality rates. The situation will further worsen once 80,000 Angolan refugees, living in camps of displaced people in the neighbouring countries start returning to the country.