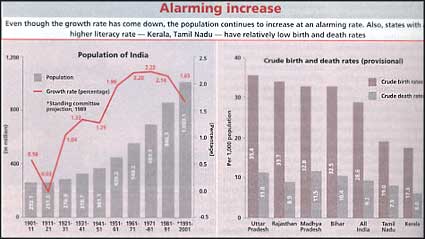 India is the second most populated country in the world. In 195 1, the National Family Welfare Programme was launched with the objective of reducing the annual birth rate, by AD 2000, to 21 per thousand; the annual death rate to nine per thousand; the annual growth rate at 1.2 per cent and the annual infant mortality rate to below 60 per thousand. However, these targets are far ftom being realised. The Seventh Five Year Plan admitted that the approach adopted in the programme was not successful and hoped to reach that goal by AD 2006-2011. Keeping in mind the present levels of achievement, the Eighth Plan visualises that these targets can be achieved only by AD 2011-2016.