More than 26 asteroids entered Earth's atmosphere between 2000 and 2013. None of them was detected in advance 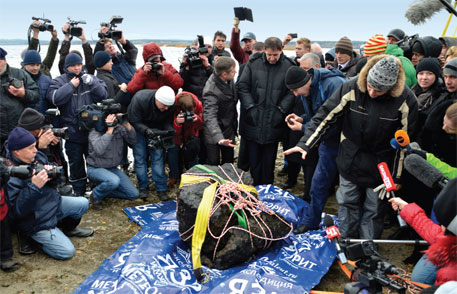 The chances of a “city-killing” asteroid striking Earth are much higher than scientists previously thought. A recent report has found that more than 26 asteroids reached Earth’s atmosphere between 2000 and 2013—a number much higher than estimated. The findings released by the Nuclear Test Ban Treaty Organization on April 24, 2014 suggest that some of the asteroid explosions were more intense than the nuclear explosion that wiped out Hiroshima in 1945.

The report says that while most of these asteroids exploded too high in the atmosphere to cause serious damage, the one that fell in Chelyabinsk, Russia, in February last year damaged hundreds of buildings and injured more than 1,600 people. The report points out that none of the 26 asteroid impacts was detected in advance, suggesting the need for a better mechanism to warn of asteroids approaching Earth.

The urgency to develop such a mechanism is growing by the day. “Since we don’t know where or when the next major impact will occur, and because none of these 26 asteroid explosions was detected in advance, it means the only thing preventing a catastrophe from a ‘city-killer’ asteroid is blind luck,” says Ed Lu, CEO and co-founder of the B612 Foundation, a private body dedicated to protect Earth from asteroids.

The B612 Foundation has partnered with Ball Aerospace, an American spacecraft manufacturer, to build the Sentinel Infrared Space Telescope Mission. The Sentinel Mission will place a telescope in an oblong Venus-like trajectory to orbit Earth.

An asteroid approaching the atmosphere can be deflected by either changing its course by an impact on its surface by a spacecraft, or by transporting the asteroid to an orbit around Earth using an aircraft. The asteroid can also be hit with a nuclear bomb, but such an explosion is banned under the UN peace treaty.

“You cannot deflect an asteroid you don’t even know is headed to Earth,” says B612 co-founder and chair emeritus Rusty Schweickart, who flew on the Apollo 9 mission in 1969. The goal of the B612 mission is to locate asteroids before they come near Earth so that scientists have enough time to prepare a deflection mission. The project is expected to be launched in 2017.

Besides the private initiative, several governmental agencies are also looking for options to identify asteroids and deflect them. In October 2013, the UN passed a resolution calling for the establishment of an International Asteroid Warning Group that would monitor potentially destructive extraterrestrial objects. The decision was taken after the Association of Space Explorers published a report stating the need for international cooperation on the issue.

NASA, on its part, has announced an Asteroid Grand Challenge in which it has invited government agencies and scientists to locate asteroids so that they can be analysed for the threat they pose to the planet. NASA is also planning to launch the Asteroid Redirect Mission that will use robots to capture and redirect potentially hazardous asteroids to a stable orbit around the moon.

The Organisation for Economic Co-operation and Development (OECD) is also planning to set up a forum and find technologies that may be used to detect asteroids in a better way. India is a partner country of OECD.

Even the European Union is running a project to brace against asteroid collisions. The mission is called NEOshield (Near Earth Object shield) and it partners with various European universities and research centres.

Asteroids, big and small, will continue to move towards Earth and Lu believes that unless the detection mechanism is strengthened, one will eventually hit us.
Print edition Print edition Science & Technology Russia Physical Science Down to earth Astronomy
Donate Now