What happens when poverty meets plastic? Economist Kaveri Gill’s research suggests the result is entrepreneurialism—hard-won and struggling still—plus a greening of the city. In her book, Of Poverty and Plastics, this idea, among several others, is backed by several years of research and innovative methodology.

Kaveri trained as an economist, but her interest compelled her to expand her tool-kit beyond one discipline. Her use of anthropology throws light on an entirely new aspect of how caste is used to convert an inherited disadvantage into a beneficial trading system—a sort of subaltern reading of plastics as part of modernity.


This will surprise most of Kaveri’s readers, who are likely to be middle-class urbanites. Most will have experienced some kind of legislation on plastics, particularly plastic bags. If they live in India, and particularly Delhi, much of her work will appear counter-intuitive, because it won’t synergize with the popular understanding of plastics, particularly recycled plastics. This is exactly what makes Kaveri’s work valuable to any policy maker, urban planner or activist. It rigorously argues for re-thinking where plastics go, and to whom.

Traders and other actors in the pyramid have done extraordinary innovation to create an environmental service. Gill shows how such recyclers have created tight financial networks and had the foresight to re-envision the potential of waste as a means to improve their status. Instead of being acknowledged for this, they stand accused. Gill devotes a well-argued chapter to what she calls privileged environmentalism, a term that bursts with new meaning in the backdrop of the climate change discussion. She shows the greening of Delhi, through court orders and otherwise, has ironically, been inimical to what is globally lauded as environmentally sustainable activity.

Equally important is Gill’s argument about poverty. If there is one takeaway from the chapter on the issue, it is that apart from wastepickers, several other layers in the recycling chain are really poor. Her work shows that the state’s unrealistic quantitative methods to measure poverty actually leave out the fact of economic deprivation of these entrepreneurs. This is more important than it initially seems because several local government plans and schemes focus only on wastepickers. True, most of them are the visible face of urban poverty, and undoubtedly marginalized, but they aren’t the only ones. Unfortunately, such bias stops policies from having impact or even fair. Besides, it’s a valuable learning for the many ngos across the country that, with the best of intentions, work with only wastepickers. This book should also serve as a reading to donors, who support programmes that cause damage to many marginalized actors. 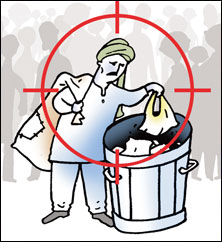 In a country propelled by the informal sector, it’s vital its actors read this book. As new calculations show, over 37 per cent of India’s population live in abject poverty. To even begin addressing this shameful state of affairs, we must power innovations the poor have designed to lead better lives. Gill reopens an old discussion and creates the chance to leapfrog to new opportunities.

The writer is with Chintan Environmental Research and Action Group, Delhi