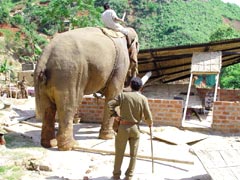 the recent eviction of illegal occupants from Assam's reserve forests has exposed an unholy nexus between various government departments in the state. It is believed that the encroachers possess legal documents, authorising them as owners of the forestland. The title deeds, they allege, have been issued by the forest department (fd). Many of the encroachers have even paid land revenue.

The massive eviction drive conducted by the state fd is in compliance with the Supreme Court (sc) order to clear all reserve forests of illegal occupation in Assam. The deadline set by the Union ministry of environment and forests (mef) is September 30, 2002.

Following the operation, thousands of encroachers have been dislodged. The oustees around Guwahati claim that they obtained permission from the Guwahati Metropolitan Development Authority (gmda) and the Guwahati Municipal Corporation (gmc) to construct permanent houses. Electricity and telephone connections were also issued to them without any objections from the Assam State Electricity Board (aseb) and the telecom department.

Tarun Haloi, a shopkeeper in the Panjabari area of Guwahati, whose house was among those demolished, states that he is enrolled in the Dispur legislative constituency voter's list for the past three years. "The government has not mentioned anything about our rehabilitation," he laments.

The eviction drive has led to widespread public outrage and political debate. "The step should have been taken after a proper demarcation between government land and reserved forests," says the local member of legislative assembly (mla), Robin Bordoloi. "Why did the fd not stem the influx of these people earlier?" asks Haren Deka, a local social activist.

According to Soumyadeep Datta of Nature's Beckon, a non-governmental organisation (ngo), in spite of the unabated encroachments, the fd chose to remain silent and never took any action in the past 40 years.

However, the move has been welcomed by some. Dhiren Baruah, the president of Save Guwahati Build Guwahati, a local ngo, avers: "Encroachments in the hills have resulted in severe water-logging in Guwahati."

According to D Haraprasad, the state conservator of forests, encroachments are distinctly high in and around the 10 reserve forests of Guwahati.