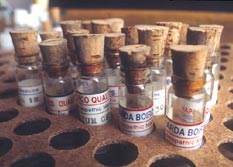 researchers have come up with yet another explanation for the effectiveness of homeopathic medicines. An experiment conducted by Louis Rey, the scientific advisor of Switzerland, indicates how the potency of the medicines is maintained even if they are diluted several times during preparation. Most question the efficacy of homeopathic medicines on the grounds of serial dilution -- the medicines are diluted many times so that they do not contain even a single molecule of the active ingredient. Some experts assert that if the active ingredient is not present, the medicines cannot prove effective. However, homeopathic practitioners believe the dilution makes the medicines more potent. They claim water retains the memory of the substance that has been added to it.

Rey's recent experiment lends scientific credence to this hypothesis. During his test, he showed that the presence of active ingredient alters the chemical bonding of water and the change is maintained even when the solution is diluted several times (thus indicating that the medicines do not lose their efficacy). He used thermoluminescence, an indicator of the chemical structure of a substance, to prove the premise. To calculate the thermoluminescence, a substance is frozen and then subjected to radiation. Thereafter, it is heated so that the absorbed energy is released in the form of light, which is the measure of thermoluminescence. Rey calculated the thermoluminescence of heavy water and found that it emits two peaks of light. He then added lithium chloride and sodium chloride to the water and found that it emitted just one peak, indicating that its chemical structure had altered. The change was maintained even when the water was diluted to around 10 -30 grammes of the solute per cubic centimetre of the water.

However, some experts are sceptical about the experiment. Martin Chaplin from the uk-based South Bank University asserts that freezing the water (as was done in the experiment) rearranges its hydrogen bonds, thus making it chemically different from the water used for making homeopathic medicines. Brendan James Howlin, an inorganic chemist from the uk-based University of Surrey, also points out that heavy water is not used for preparing homeopathic medicines. The chemical structure of normal water may be vastly different from heavy water. Therefore, to prove the efficacy of homeopathic medicines, it is a must to assess whether normal water behaves in the same way as heavy and frozen water.