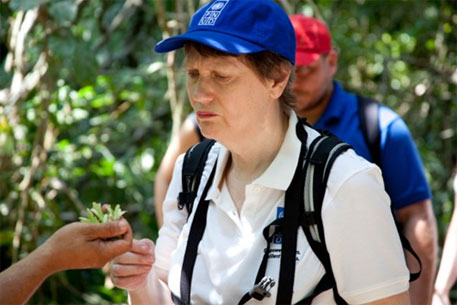 The crucial role of forests in tackling climate change while helping sustain over 1.6 billion forest-dependent people around the world found prominent mention in the World Economic Forum in Davos last week.

Addressing the World Economic Forum, UNDP administrator, Helen Clark, said that while she was “pleased to witness the growing global partnership around addressing deforestation, both as a climate change and a development issue, the international community needs to commit to providing adequate, sustainable and predictable payment for REDD+  results at large scale”.

It may be recalled that forest protection and sustainable agriculture were recognized as critical components of the new deal on climate change at the climate summit in New York last September.

Clark has been stressing on role of forests in mitigating climate change impacts for quite some time. She spoke how climate change is undermining the development gains which are set under the Millennium Development Goals, (MGD) while addressing participants at the Global Landscape Forum organised by Centre for International Forestry Research at the Conference of Parties in Lima  last December. She emphasised that a sustainable landscape is essential for climate change mitigation, adaptation and sustainable development.

“These include the protection, restoration, and sustainable use of terrestrial ecosystems; sustainable management of forests; reversing land degradation; and halting biodiversity loss.”

Clark had urged developing forest countries to make stronger efforts at mitigating climate change and reducing deforestation, including land-use reforms. And appealed advanced economies to follow up on large scale forest protection incentives.
Even before the world leaders and business heads arrived in Davos for the World Economic Forum meet, the momentum was building for discussions about the crucial role of forests in tackling climate change.

There was much impetus building as Clark was to open the session with her talk on the theme, “Reducing Tropical Deforestation Related to Key Agricultural Commodities”. She was joined by the Norwegian Prime Minister Erna Solberg, Peruvian President Ollanta Moises Humala Tasso) and other political and industry leaders.

"Forest conservation is critical to climate change mitigation. Our forests absorb carbon dioxide and provide a range of other services, but when cleared they become a significant source of greenhouse gas emissions," Clark said before the Davos event. Over 13 million hectares of forests are cleared annually, around three times the area of Switzerland–contributing up to 20 per cent of global emissions, and threatening economic progress and human well-being.

Referring the UN climate summit hosted by UN secretary-general, Ban Ki- moon, last year in September 2014, she said “we need to maintain and build upon the momentum made last year”.

The New York Declaration on Forests was cited as “the key outcome of the Climate Summit”, which saw a ground-breaking partnership of 175 entities, including developing and developed countries, states and provinces; major companies; indigenous leaders; and civil society organisations, who pledged to halve deforestation by 2020, and end it by 2030.

The Davos session last year on forests had focused on advancing deforestation-free supply chains. As a result, 2014 saw the percentage of global palm oil trade covered by “deforestation-free” commitments grow to over 90 per cent—an unprecedented accomplishment.

The focus for 2015 would be on how “deforestation-free” commitments might be expanded to cover more agricultural commodities (beyond palm oil) and new companies (soy, paper & pulp and beef sector), and examine how smallholder farmers and indigenous peoples can benefit from the implementation of deforestation-free supply chain commitments.

With a global climate agreement due to be finalized at the Paris Climate Conference at the end of the year and forests to be included in the Sustainable Development Goals to be adopted by UN member states in September, Clark says 2015 matters like no other year since the turn of the century.