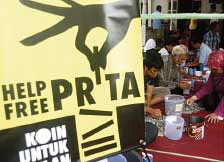 A large number of Indonesians have come out in support of year-long woman fined for criticizing the country’s healthcare provision in an e-mail to friends. From Aceh to Bali, Indonesians have donated a truckload of coins to help Prita Mulyasari pay a fine of 204 million rupiah (US $21,400) after she was convicted of defamation by a Jakarta court.

Mulyasari’s ordeal began last year when the bank employee sent an informal e-mail to 20 friends informing them of her poor treatment at Omni Hospital outside Jakarta.


Mulyasari who had been misdiagnosed with dengue at the hospital, found after being moved to another institution that she, in fact, had mumps.


Her e-mail was transferred without her knowledge from one mailing list to another in cyberspace before being tracked by Omni hospital, which filed a complaint in a Jakarta court. Mulyasari was sent to jail in May and charged with defamation. She was freed after 21 days, amid a huge outcry from the media and bloggers.

The saga took a new turn in early December as a high court in Jakarta, upheld the ruling of the lower court and ordered Mulyasari to pay damages.