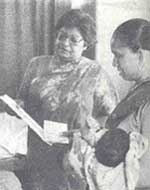 The Indian government and the United Nations Fund for Population Activities (UNFPA) are trapped in a cleft stick because of five million defective copper-T contraceptives given by UNFPA to Hindustan Latex Ltd, a government of India undertaking. The copper-T contraceptives were part of batches manufactured by US-based Finishing Enterprises that failed to meet standards prescribed by the US Food and Drug Administration and could expose the manufacturer to damage suits in millions of dollars.

The major defect in the copper-T shipment is that part of the copper wire sticks out from the contraceptive when it is being used. Warns Lucy Oommen, former medical superintendent of St Stephen's Hospital, in Delhi, "Using these defective devices would cause internal injuries and aggravate existing health problems."

Meanwhile, UNFPA spokesperson, trying to pass the buck, said, "We have given the relevant documents to the Indian government and it is now up to them to handle the situation."