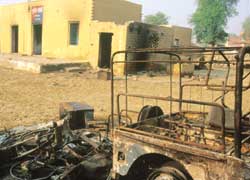 A grand mahapanchayat (mega assembly) was held on July 24, 2005, in Rajasthan's Sriganganagar district by thousands of farmers demanding more water for irrigation. The protestors were opposing the alleged mismanagement in water distribution in the Phase I area of the Indira Gandhi Canal Project. Earlier, the issue had led to widespread protests, leading to killing of some farmers in police firing see Down To Earth, 'Farmers' uprising in Rajasthan', November 30, 2004). At the mahapanchayat, the farmers charged the government with not following the agreement it signed with them in December 2004.

The issue got a political hue at the meeting due to the presence of leaders of the Congress party, the main opposition in the state assembly. They warned the Bharatiya Janata Party-led government of serious consequences if it didn't follow the pact. The Communist Party of India (Marxist) has already offered its support to the farmers. The political party leaders said they would raise the issue in the coming assembly session and wouldn't let the House function unless it gets resolved. However, the state's public works department minister Rajendra Rathore claimed the agitation was "devoid of any issue" and warned that elements creating law and order problems would be severely dealt with.